Do you wish to stay healthy, yet eat yummy food? Having a bowl of soup when the hunger pang hits is the best way to stay full without loading up the calories. What’s more, soups are full of nutrients! Here’s why having a soup is a healthy idea. Chef Vikas Khanna shares the recipe of a refreshing and healthy green asparagus soup with mascarpone panacotta and farro.

Cut the hard part of the asparagus’ stems and use only the top part of it. Blanch it. Now puree and strain it. Pureeing ensures that asparagus retains its flavour. Now cook it in olive oil, which gives the soup a lovely glaze. You may also read the top 10 benefits of olive oil.

Instead of croutons, farro is added to the soup. Farro is an ancient grain which is known as ‘grain of gods’ in Egypt. Cook farro like barley/wheat by just seasoning it with olive oil and salt, so that it adds a distinctive flavour to the soup.  Know the difference between whole wheat flour and refined flour.

To make the Mascarpone Cheese Panacotta, you just have to set up the cheese by cooking milk with gelatin. For the vegetarians, agar agar is used as the substitute for gelatin.  There has to be firmness in the texture of the changed form of milk. To garnish the Mascarpone Cheese Panacotta, use the blanched tender green spears of asparagus. Garnish with a piece of tomato on top of it, seasoned with olive oil, black pepper and lemon. Read the health benefits of tomato.

For plating, place the mascarpone cheese panacotta in the soup bowl. Sprinkle the farro around it and start pouring the asparagus soup only from one side of the bowl and do not fill it completely. Allow it to form its own shape.

Video and Image source: The Healthsite 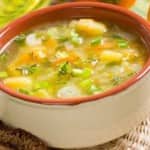 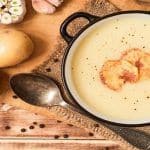 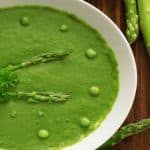 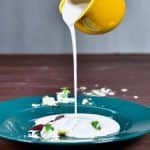 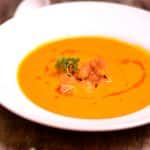