Indians just can't get over 'bhabis'.

The most searched term all over the world was, ‘lesbian’, which somehow wasn’t on the top 10 searched terms in India.The top gaining searches are: Also Read - This is how Sunny Leone stays fit

The topics that Indians searched more than the rest of the world:

One in 10 women finds sex painful

4 sex positions to try during blindfold 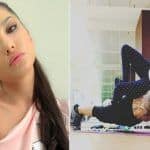 This is how Sunny Leone stays fit