7 lame excuses cheaters give when they are caught red handed

When the partner starts blaming you for his behaviour, there is only one solution. 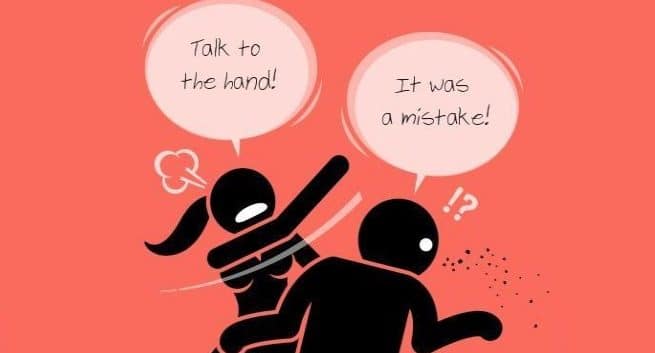 So you caught a boyfriend red-handed. Did you think the theatrics would end? No! In fact, the drama has just begun. Cheaters caught in the act often go on the defensive, doing and saying everything they can to make them seem less of a bad person. Here are seven common excuses we have all heard before from scums. Also Read - Don’t forget to ask your partner's blood type before tying the knot

Correct. It only means that your partner doesn’t respect you. And if you can settle for that, you are free to forgive them. When they caught in the act, most cheaters will try to bargain saying that they didn’t cheat because they stopped loving you. By doing so, they intend to salvage the situation by appealing to your emotions and momentarily distracting you from the enormity of their actions, hoping you’d forgive them. Don’t ever fall for it. Because:

#1 You DO NOT cheat on someone you love.

#2 You should take that as a personal insult and dump them anyway because they think you are DUMB enough to fall for it.

“I didn’t know what I was doing/ I was drunk”

Being drunk is never an excuse for cheating. Can you ever trust your partner around booze and attractive people anymore? It’s a lot to live with. As for the “I didn’t know what I was doing” excuse, what kind of grown individual has no control over his or her sexual urges? In any case, it’s not worth staying with a person who can’t take responsibility for his or her own behaviour.

(Read: Signs you are dating a married man)

A classic way to deflect blame is to place it on the other person. At the face of such deception, you would try to hang on to any shred of hope and b. Your partner also knows that you’d be seething with jealousy at the prospects of another person laying his or her hands on what’s yours. It’s easy to set you against the other person. But it takes two to tango! Your partner was as complicit in the act as the other person and you shouldn’t be cutting them any slack. And even if they were truly seduced against their will, why wait till they get caught? Anyway, what good is a weak-willed partner? They have to go!

(Read: Married men reveal why they are on Tinder)

“You are being delusional/ it’s not a big deal”

A common gaslighting technique cheaters use is to make the opposite person doubt their own judgement. By trivialising the episode, they subtly sow the seeds of self-doubt in your mind. When you confront them with evidence, they’d say you are reading too much into it. They accuse you of being paranoid or a nag and restricting their freedom. In doing so, they are setting a stage for more such treacherous behaviour in the future. Soon, their cheating behaviour gets normalised and you won’t have the guts to call them out.

“You weren’t giving me attention”

Since you weren’t attentive towards them, they looked for attention somewhere else. If you had a coin for every time a cheater said that to his partner, you’d be a millionaire twice over! Lack of attention in a relationship can cause some serious problems. But a good partner would deal with it like an adult. They’d either come clean to you by communicating with you. They’d tell upfront that you that they want to end the relationship or work things out with you. Only a weak-willed person cheats and uses lack of attention as an excuse.

“I can’t help myself. Only you can save me”

An evergreen ‘babe-in-the-woods’ sort of excuse is where the cheater feigns a loss of control over his own life, which has prompted them to indulge in reckless behaviour. If you have a nurturing streak in you, you’d feel sorry for the person. In reality, they are exploiting your maternal side by looking helpless. While you your mental and emotional energy, trying to reform the cheater, the scum is already having a time of his life, indulging in casual flings. Here’s a piece of advice for you: if you want a fulfilling personal project, plant and nurture a tree.

“It was a mistake”

There are two ways of looking at this. If it is a genuine mistake and the cheater makes no bones about it, the choice is yours whether you want to take your partner back or not. There is no one-size-fits-all solution for relationships to deal with cheating. Sometimes, the story can have a happy ending and your partner may never cheat again. But if the same excuse recurs after every cheating episode, you need to know that there is only one way to fix the problem: dump your partner.

Try tantric sex to get the best orgasms