Easy to use and non invasive, vaginal ring can be your new best friend.

Have you wished for a contraception method that was effective, non invasive, discreet, easy-to-use and painless? Most women do. Contraceptive procedures like tubal ligation and copper T are invasive and inconvenient, and the embarrassing visits to the gynaecologist's office are avoidable. Pills, on the other hand, are convenient but come with some nasty side effects like nausea, breast tenderness and weight gain.

When vaginal ring (also known by its brand name NuvaRing ) was launched for the first time in 2001, it promised some unique advantages over the existing methods of contraception. Compared to them, the vaginal ring was easy-to-use and claimed to have no side effects whatsoever. Launched by the pharma company Organon, NuvaRing was marketed only in the United States and Europe initially. But as of 2009, the vaginal ring is widely available in India as well. The cost of a single ring is Rs 790.

What is a vaginal ring?

The vaginal ring is a transparent bangle-like ring containing 2.7 mg of oestrogen ethinylestradiol and 11.7 mg progestin etonogestrel.1 It is flexible, so it can be manipulated and inserted into the vagina. Once inside, the ring releases 0.015 mg of oestrogen ethinylestradiol and 0.120 mg of etonogestrel per day into the body, preventing the ovaries from releasing eggs. So it saves you from the hassle of popping pills every day or getting an invasive procedure done. Although it is mainly meant for preventing pregnancies, vaginal ring also comes with some bonus benefits like improving cycle control, reduction in prolonged menstrual bleeding and period cramps.2 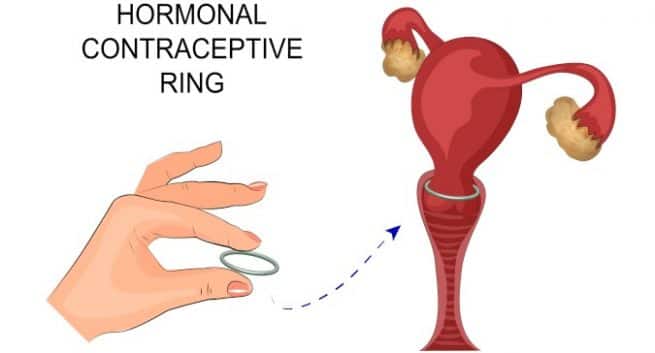 How is the vaginal ring used?

The best part about the vaginal ring is that you don't require assistance from healthcare professionals to insert it. It can be done in the comfort of your home. Since the ring is flexible, it can be bent and inserted into the vagina where it will remain for three weeks. The ring does not have to be positioned in any specific way inside the vagina for it to work. It can be inserted like a tampon into the vaginal orifice.

Removing is as easy as inserting it. Once the three-week period is over, reach for the ring by inserting your index finger into your vagina, hook it through and pull it out. Throw the ring away in a resealable pouch provided with the pack and don't ever flush it down the toilet.

If the drugs are given orally, their absorption gets affected by the digestive process. Whereas, if they are inserted vaginally, the drugs can be optimised by the body without the ravaging effects of the gastrointestinal system. The concentration of the drug is not affected during metabolism and the usage is discreet, making the vaginal ring a more efficient method of contraception as compared to its invasive and oral counterparts.3

(Read: What happens if you take birth control pills and emergency contraceptive pills together)

Who should be cautious about using the vaginal ring?

It is necessary that you talk to your gynaecologist before you try the ring, especially if you have had a history of cardiovascular problems; liver diseases; blood pressure issues; neurological headaches; suspected cancers of the breast, endometrium, vagina or cervix; embolism; and undiagnosed vaginal bleeding.2

Are there any side effects?

Most gynaecs in the city give a big thumbs up to the vaginal ring, however, it may not be without its side effects. In a survey conducted in 2004, researchers conducted a one-year-long study on the effects of vaginal ring use on 2300 women. While it was obvious that the ring is effective, mostly well-tolerated and acceptable to most women, problems like withdrawal bleeding (bleeding was seen when the ring is removed) and irregular bleeding were seen in most cases.4

The same study also reported that the women who discontinued use of the vaginal ring experienced problems such as discomfort, sexual problems and expulsion of the ring. But 85 percent were happy with the ring and 90 percent said that they would recommend it to others.

A study conducted by the British Medical Journal also stated that women who use vaginal rings have 7.9 to 6.5 times increased risk of blood clots forming in the deep veins of the body, a dangerous, life-threatening condition.5

Will it prevent STDs?

Since it is only meant for contraception, vaginal rings cannot protect against venereal diseases or HIV infections. For that, it is important to use a condom.