World Down Syndrome Day 2018: Young, single and father to a Down syndrome baby

"No one supported my decision of adopting a child with Down's syndrome; my parents were against it, my friends warned that no girl would be willing to marry me!"

Aditya Tiwari, a single man adopted a baby with Down Syndrome in 2016. The adoption agency created many hurdles in the adoption process and the Women And Child Development Minister, Maneka Gandhi, had to interfere to hasten the process. I caught up with him to find out how he is dealing with his new found fatherhood and that too, with his child being differently abled. Here's his story in his words.

It's been a month since I got Avnish's custody and things have been very smooth so far. There were issues, but I never gave up. Because somewhere deep inside I was connected with the child and I wanted to adopt him, come what may.

I first met Binney, now Avnish, on 13 September 2014 when he was only six months old. I was visiting Missionaries of Charity Jyoti Niwas Indore, Madhya Pradesh on my Father's birthday to do some charity service. I was told that no one was adopting Binney because he was a special child and a hole in his heart, a defect in his eye and weak legs. I had decided to adopt him and went and spoke to the centre head about it. I was told that I can't adopt because I am not married. But that did not change my mind, I decided to bear all his expenses--food, clothing and medicines till I get married and then I would adopt him as per the law. I started visiting him every month, providing for him and other children in the orphanage. I would travel from Pune to Indore just to visit him. But one fine December day, he was moved from the Indore centre of the orphanage to the Bhopal centre. Then onwards I started travelling to Bhopal from Pune which is almost 850 km one way, to visit him. 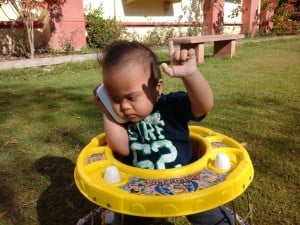 This went on for a few months, and when I visited him in the month of March 2015, I was told that he was moved to the Delhi centre of the orphanage for foreign adoption, and I was asked to stop following him. That is when I smelt something fishy, and I wrote to Delhi chapter of the orphanage. I was shocked to find that no child was transferred to the Delhi centre from Bhopal. Meanwhile, I had started researching about the authority that handles adoption in India for help. I wrote to the State Adoption Resource Authority (SARA) and Central Authority Resource Authority (CARA), but I received no help. After that, I wrote to the Prime Minister's Office and the President of India. I finally got in touch with the Minister of Women and Child Development, Smt Maneka Gandhi, and was shocked to learn that she had already instructed CARA to look into the matter. That is when CARA actually looked into the matter and concluded that there was no record of Binney with Child Welfare Committee and that it had no clue that a child had been moved to Delhi for foreign adoption. The orphanage had illegally kept Binney and 30 other special children. It was a case of child trafficking, and I raised the issue with National Human Rights Commission.

On probing more, I was told that Binney is not an orphan. When I met his parents, I was shocked to see that they are well-educated and well-settled people. I requested them to take Binney back. They said they didn't want him because he suffers from Down's syndrome. After that, Binney's parents legally surrendered him to Matruchaya, an adoption agency. However, I still couldn't adopt him because of the adoption guidelines. After writing hundred of emails and faxes to the government, CARA changed the adoption guidelines in March 2015. According to the new rule, any unmarried individual above the age of 25 can adopt a child and I became eligible to adopt Binney. I completed all the adoption formalities, all the paperwork with Matruchaya by August 15, 2015. Despite giving them all the information and completing all the formalities like the Home Study Report and Child Matching and Acceptance by the parents by 1st September 2015, I only got the custody on 1st January 2016. During those few months in between, the agency delayed the procedure by bringing up unnecessary issues. I then filed complaints against them on the PMO portal and again raised the issue with the Ministry of Women and Child development. It was only after all this that I got a letter from them on 18th December 2015 to come and take the custody of the child any time between January 1 to January 8 2016 . I took Binney's custody on the 1st. I renamed Binny to Avnish.

A month after the adoption

Yes, it's been a month, and things are as fine as they could be. In spite of all his medical isues, I have had no difficulties in raising him. People ask me how I deal with him being special and how I have prepared myself for this 'additional responsibility'. I feel all these things are just in our head. It's our attitude that is at fault. He is no additional responsibility. He's my son. I care for him as one would care for any other child. He wakes up in the morning at around 7.00m am, eats his breakfast then sleeps until noon, plays with my parents, cries when he's hungry. Any other child his age does that. I come home from work in the evening, we play together, eat together. I put him to sleep. My parents, who were against his adoption, have also had moved in with me to help me with Avnish.

Over the past year, since the time I decided to adopt him, until the time I actually got his custody, I have prepared myself for all that life has to offer. I fully understand, that he will not grow as fast or learn things as quickly as other children his age would. He will be a little behind them, but I am absolutely fine with it.

He does have some physical limitations, but they can be easily overcome. He has a hole in his heart, but the doctors say that it will naturally heal by the time he's three and a half years old. And if it doesn't, there are treatments available. I don't want to focus on what is missing and how much effort I will have to put in to raise him.

Avnish and I, recently travelled from Indore - Delhi - Hyderabad to Mumbai and back. All through the journey, he was comfortable with me and I with him. We spent a wonderful time together, and I just got some more time to bond with him. 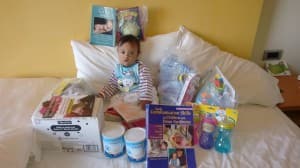 Initially, everyone tried to convince me against adopting Avnish. My friends tried to explain that I am single and would be diminishing my chances of getting married. People also told my parents that maybe I can't father a child, and that's why I am adopting. Older women have asked me if I was sexually unsatisfied. All sorts of bizarre things have happened to me in the past one year. However, once I got Avnish's custody and was praised for adopting him, women have wanted to be associated with me. My friends say that they are proud of me. It's just that the society functions very weirdly, and it's very daunting.

Irrespective of this I am confident and positive about life with Avnish. I am not deterred by the fact that I have a child who's special. I am sure there's a woman who's everything I have wanted in a partner somewhere and who will accept Avnish and me.

But I would also like to mention the other side of the situation. I have received support from parents of children with Down's syndrome. Many have applauded my efforts. They say I have given them hope. I have also been awarded the Global Citizen Award of Barclays Bank, the company I work for. I just hope I can inspire other people to adopt and also break the taboo and stigma linked to adoption.

5 ways to save your baby from mosquito bites