A 25-year-old woman lost her life due to appalling medical negligence at the KC General Hospital in Bangalore. The deceased, BG Rajeshwari, was admitted to the hospital on Saturday for a regular blood

A 25-year-old woman lost her life due to appalling medical negligence at the KC General Hospital in Bangalore. The deceased, BG Rajeshwari, was admitted to the hospital on Saturday for a regular blood transfusion, that was being done to treat her anaemia. She was scheduled to have two blood transfusions on Saturday and Monday which proved to be fatal as the hospital staff transfused her with blood of the wrong blood group. Incidentally, Rajeshwari, herself pointed out that they were transfusing her with B+ve blood instead of blood of her blood group O+ve. Her family members noticed that her face and limbs had started swelling the very next day. Also Read - Blood transfusion is complicated: Know the risks involved

According to the family she suffered for five days before breathing her last on Thursday. It was only after her second blood transfusion that the doctors noticed their mistake. She was immediately shifted to Victoria Hospital. According to Rajeshwari s sister, she noticed Rajeshwari s face and hands swelling and immediately asked the nurses to stop the transfusion, but they said that it was only the label that was wrong and that the blood was of the right group. She added that only after a lot of arguing, and showing them Rajeshwari s earlier records did they accept their mistake. Also Read - Scientists claim transfusion of young blood can prevent age-related diseases

Investigation revealed that the hospital staff had conducted a blood test before transfusion, but the group was erroneously reported by a lab technician. Rajeshwari was visiting KC General Hospital every three months for blood transfusion. Her regular doctor was not available when she visited the hospital this time. Her post mortem reports revealed that it was the lab technician s erroneous reports that caused the goof up.

The young woman s family have staged a protest outside the hospital and the police have filed a case of medical negligence against the hospital.

To know more about your rights as a patinet, watch our related videos:

Ranbaxy goes on mass retrenching spree: Set to fire 400 employees in the next few months

Deadly version of the coronavirus prompts emergency committee meeting: WHO 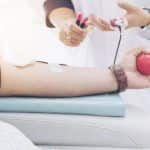