World’s best to participate in Airtel Delhi Half Marathon

The world's finest distance runners will take centre stage on the grand platform that has been set up for the Airtel Delhi Half Marathon which will be flagged off from the iconic Jawaharlal Nehru Stadium on Sunday.

Keeping them company will be India's best long distance athletes as well as 31,000 plus participants competing in the different categories on race day. 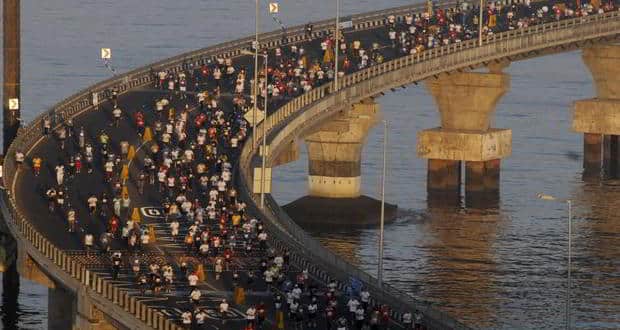 Weather predictions for Sunday's race are good with temperatures expected to range between 8 and 12 degrees during the race.

In the men's elite race, 18 internationals will be paced by Timothy Kiptoo and Vincent Rono through around 12 kms in 59 minutes pace, en route to attack the current Course Record of 59.15.

It is expected to be a tight and competitive race amongst some of the key figures, including 2013 world leader Geoffrey Kipsang (58.54), 2012 world leader Atsedu Tsegay (58.47) and defending champion Edwin Kipyego. Some dark horses in the packed elite field are 2013 Bangalore 10km champion Alex Oloitiptip and 2012 Seven Hills Race champion Nicholas Kipkemboi.

The women's elite field is not to be underestimated either. Having defending Champion Wude Ayalew, 2013 world leader Lucy Kabuu (66.09), 2012 world half marathon champion Meseret Hailu, 2013 Berlin Marathon champion Florence Kiplagat and silver medallist of the 2013 World Championships 10,000m Gladys Cherono competing for high honours, it is also expected to be a close race. The outsider on the women's side is double World Cross champion Emily Chebet.

The Indian men's race is also expected to be a close race with no clear favourite, though defending champion Rahul Kumar Pal and his teammates from the Army, Kheta Ram, V.L. Dangi, G.Lakshmanan and Irappa D Akki, are expected to hold sway over the field. In good form is also Indrajeet Patel of ONGC and Rati Ram Saini of Railways, who are also a part of the Indian camp.

The race day will also see in action different personalities from India Inc. and Bollywood. Representing India Inc, will be the country's top honchos and running enthusiast Anil Ambani, Gopal Vittal and N Chandrasekaran. The Bollywood fraternity would be represented by Bipsha Basu, Face of the Event, along with Rahul Bose, Manisha Koirala, Mahima Choudhury and Gulshan Grover among others.