Amitabh Bachchan is known to actively use social media sites like Twitter and was one of the few Bollywood stars who first wrote a blog. And the Internet and Mobile Association of India (IAMAI) has named him the Social Media Person of the Year. He is one of those celebrities who has a wide reach among masses and has truly used social media to its full potential to create awareness about various health issues.

He s not only a brand ambassador for the polio awareness campaign where he proudly urges people to go to the polio booths to give their children the oral polio vaccine. He also promoted the Do Boond Zindagi Ke campaign widely from his twitter account. When India was declared polio free he tweeted Finally! India has been removed from endemic list. By end of 2014, we shall be polio free country. A sense of pride.

After the polio eradication was successful, he supported the emancipation of the girl child. He tweeted As UN ambassador for Girl Child, I hope and pray we accomplish same results as polio rid nation of discrimination against women. He recently tweeted : 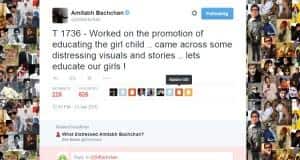 Recently, he also said that if there would be an anti-tobacco campaign he would willingly lend his voice to it as he doesn't smoke and it would be very close to his heart. (Read: Amitabh Bachchan's secret to a fit life) He was also chosen as the ambassador for the MCGM s (Municipal Campaign of Greater Mumbai) TB awareness campaign and having suffered from TB himself he said he was lucky to be a part of this campaign. (Read: Amitabh Bachchan kicks off the 'TB harega desh jeetega campaign')

He recently tweeted that he wished to start a campaign on creating Hepatitis B awareness and is planning to do it with some committed doctors. As latest as Jan 5 he was determined to create awareness about head injuries too. He tweeted If my face and my voice is needed to the cause of awareness for Head Injury and Hepatitis I have committed to it!! He also shared his commitment on Facebook. (Read: Amitabh Bachchan set t0 create awareness about head injuries) 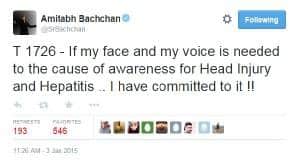 This truly shows how Big B leaves no stones unturned while taking up health causes and proudly uses social media to do so. The event is still due to happen in the capital, but since Big B won t be able to make it there, he was honoured in advance by a representative of the body and hence he received the award in Mumbai on Tuesday.

He posted on his blog srbachchan.tumblr.com. that , There is an association of social media for India the IAMAI...and they reward me with the Social Media Person of the Year award and it is time really to reward the Ef (Extended Family) for this... you are the ones that have made it possible for me to be given this recognition.