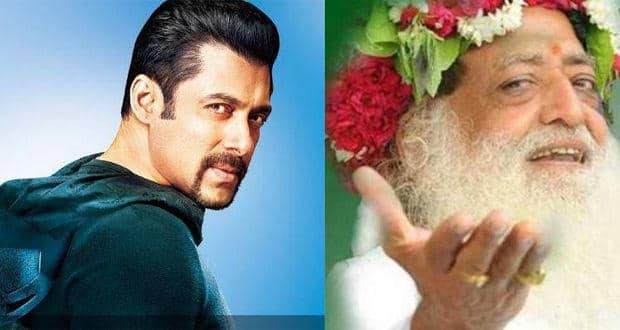 Both are darlings of the masses, revered by their followers, loathed by their critics and have criminal cases pending against them but Salman Khan and godman Asaram Bapu have another startlingly thing in common -- both of them suffer from trigeminal neuralgia, a severe condition where the afflicted suffers from unbearable headaches.

Asaram Bapu recently claimed to suffer from the condition, following which, the Supreme Court directed a medical board to examine him for the condition. Asaram, 72, is presently in jail after a 16-year-old girl lodged a police complaint on Aug 20, 2013 accusing him of sexually assaulting her at his ashram in Jodhpur. An apex court bench headed by Justice T.S. Thakur directed the principal of Jodhpur-based S.N. Medical College to constitute a team of doctors that will examine Asaram for his ailment and the course of treatment required. The court said the report of the medical board will be submitted to it by Sep 23, when the matter will be further heard. Meanwhile, Asaram Bapu will continue to remain in jail as the court said that his bail will only be considered after all the witnesses in the case have deposed before the trial court.

Interestingly, Bollywood hero Salman Khan also suffered from trigeminal neuralgia, a condition the star first experienced while shooting Partner. Salman underwent treatment for the condition in 2011 and also went to the US for treatment in Feb 2013. Characterised by intermittent, shooting pain in the face, jaw and eyes, trigeminal neuralgia affects the trigeminal nerve, which is the largest cranial nerve and sensory nerve of the head and the face. It is also the motor nerve for the muscles required to chew. The nerve sends impulses of touch, pain, pressure, and temperature to the brain from the face, jaw, gums, forehead, and around the eyes.

This condition is characterised by sudden, severe, electric shock-like, or stabbing pain that lasts several seconds or sometimes for a few minutes. The pain is felt largely on the face but may be localised around the lips, eyes, nose, scalp, and forehead. It can also cause a person's voice to become hoarse.

Usually the pain is brought on while performing simple functions like while brushing one's teeth, putting on makeup, touching the face, swallowing, or talking. Studies have shown that even a slight breeze can aggravate the condition. Read more about the disease