The National Human Rights Commission (NHRC) has issued notices to the Uttar Pradesh government and police following the death of a seven-month-old baby who was administered an injection by a rickshaw puller on a doctor’s direction, an official said Wednesday. Also Read - Uttar Pradesh sounds H1N1 swine flu virus alert after 17 cases in the past week

The commission issued notices to the district magistrate, chief medical officer and superintendent of police of Balia and sought reports from them within two weeks. Taking suo-motu notice of media reports, the commission observed that the contents of the report, if true, “raise a serious issue of violation of right to health of the child”. The baby died in the emergency ward of the Balia district hospital on Tuesday. Also Read - UP man fractures his penis after his kid jumps on him to wake him up

UP to check midday meals' quality 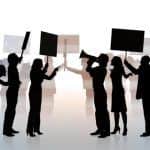 UP Health scare: Sweepers and non-experts performing medic duties seems to be the norm in the state