Lymphatic filariasis, also known as elephantiasis, is a parasitic infection caused by filarial parasites which are transmitted to humans through mosquitoes. Usually acquired in childhood, the infection causes hidden damage to the lymphatic system, with visible manifestations of the disease occurring later in life. The infection can cause painful and profoundly disfiguring symptoms such as lymphoedema, elephantiasis and scrotal swelling and can lead to permanent disability. Not only it leaves the patients physically disabled, but also cause mental, social and financial sufferings, which contribute to stigma and poverty.

According to Dr. Mandviya, Lymphatic Filariasis is endemic in 328 districts across 20 states and Union Territories (UTs), . 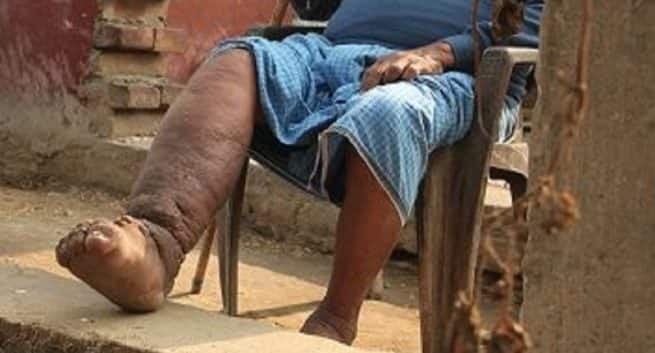 Currently, millions of people remain threatened by lymphatic filariasis. In 2020, 863 million people in 50 countries were living in areas that require preventive chemotherapy to stop the spread of this parasitic infection.

Lymphatic filariasis is transmitted by different types of mosquitoes including the Culex mosquito (widespread across urban and semi-urban areas), Anopheles (mainly found in rural areas), and Aedes (mainly in endemic islands in the Pacific).

Majority of Lymphatic filariasis infections are asymptomatic but these can still damage the lymphatic system and the kidneys and alter the patient's immune system. In chronic conditions, it can cause lymphoedema (tissue swelling), elephantiasis (skin/tissue thickening) of limbs and hydrocele (scrotal swelling).

The WHO recommends mass drug administration of preventive chemotherapy to the entire at-risk population for stopping the spread of the infection and elimination of lymphatic filariasis.