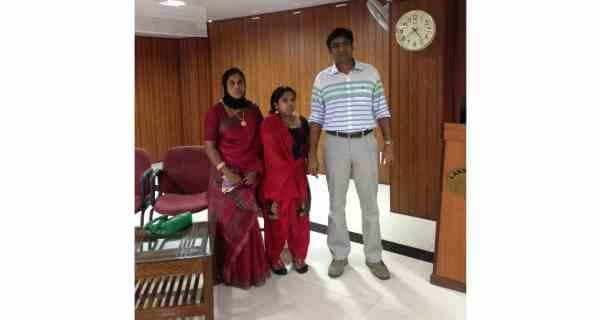 Cheerful and energetic 23-year-old Saniyath may look like a typical next-door-girl, but no one can fathom the years of ordeal, suffering, determination and courage behind this smiling face. Dr. Surej Gopinathan Nair, Consultant Arthroplasty Surgeon at Lakshmi hospital and A P Varkey Mission Hospital Kochi, performed three rare and complicated joint replacement surgeries including both hips and one knee to help her restore functionality and lead a normal life. Also Read - Reality Check For Indian Parents: Pushing For A SMART Kid May Be Detrimental In The Long Run

The only child of her parents, Saniyath was diagnosed of Juvenile Arthritis at the age of 5 years, the condition left her body and soul, both dented. Growing up with deformed, damaged joints and limitation of movement, she had stunted physical growth and was far from leading normal childhood. As a kid, Saniyath was different from other children of her age group. She would mostly cling on to her mother and avoided playing with other kids of her age group. While her cousins enjoyed childhood outdoor games, Saniyath preferred sitting at one place and often complained of pains in her stuttering speech. Also Read - Mobile use can make your kid less creative and more analytical

Joints are the places where bones meet. Arthritis can prevent people from moving their joints properly. Juvenile Rheumatoid Arthritis affects kids under age 16 and can damage some or all joints of the body. In case of Saniyath it s not just her height which arthritis affected severely, leaving her almost a dwarf, but the condition affected her entire childhood. With deformed body and severely damaged hip joints, she experienced limitation of movement. There was pain and a significant limp she suffered all through her childhood and teenage even while walking.

There is delay in God’s house not darkness is the emotion that Saniyath s family goes through every moment when they see her leading a pain-free and normal life today.

A newspaper report two years ago, kindled a ray of hope in their heart. The report was about another young femalepatient who was crippled and bedridden for over 3 years withsevere arthritis, and started walking and living independently, after she underwent multiple Joint Replacement Surgeries successfully by Dr. Surej. Though Saniyath s parents had consulted many doctors earlier, they weren t convinced enough and it was this newspaper article Saniyath s mother had come across that brought them to Dr Surej.

Describing Saniyath s case, Dr. Surej said, When the patient came to me for the first time she was in terrible pain and was crippled. For the past couple of years she was suffering from fever and was taking medicine for the same. Her body shape was out of proportion; she had disproportionately short limbs. The disease had left her with small sized bones and significant joint damage that ultimately ended up in severe Arthritis in most of her large joints, especially the hips and knees.

This was indeed a tough and rare case explains Dr. Surej. In fact, before performing this surgery we consulted and discussed her case with other experienced consultants from Kochi as well as overseas,however since this problem is rare among kids, only few experts had experience on this matter. said Dr. Surej.

Out of all other joints, arthritis had affectedboth her hips and the left knee the most. To help her with functional restoration and to rid of her pain, it was important to replace these three joints first.

First of all, her right hip was operated and then left hip and finally her left knee joint. Each operation was performed with a gap of three months in between. Every operation took almost double than the normal time taken in such surgeries as operating upon smaller-than-normal sized bonesand joints was extremely challenging.

Anticipating all these potential issues,a few doctors whom we had consulted had suggested knee fusion for her, which means joining the thigh and leg bones in to one single bone,with a straight knee. But this, apart from being socially embarrassing, would have caused excessive strain on the replaced hip joints and would have been grossly incapacitating especially at such a young age.

Finally, following his instinct and using his own experience and knowledge Dr. Surej decided to replace the knee instead of fusing it. This entire surgery was a challenge for me, right from making the decision to go in for the surgery, to get the knee cap back on track, and to eventually fitting the artificial joints in the stunted bones. But the best part is that it all went well and the patient received the desired results, said Dr. Surej.

Within a couple of weeks after the knee surgery, with the help of aggressive post operative rehabilitation, she miraculously regained her lost muscle power and started walking comfortably.One cannot forget the valuable help and support given by Arun kumar, Lakshmi Hospital s Chief Physiotherapist, who also played a significant role in Saniyath s dramatic and speedy post surgical recovery.

Going down memory lane, recalls Saniyath s mother, Saniyath would be very happy playing games sitting at one place. She enjoyed company of other kids but would get irritable when asked to participate in activities that required moving around. Her school teachers also had a similar observation. Initially we did not give too much of attention to her behavior and took it as part of her growing up. I often used to press her legs to put her to sleep. However, one day I noticed slight swelling around her joints and that is when I was alarmed.

Saniyath s parents took her to a pediatrician and after consulting many doctors finally discovered that their only daughter was suffering from Juvenile RA.

Coping with this chronic illness diagnosis was not easy for us as parents. It was like a family diagnosis. We went through many emotions from sadness to guilt to anger that why my child had to go through this. It took us a while torealizethat we need to address rather than ignore these emotions. We needed to help our child maintain the attitude that arthritis is part of who she is, not the only thing she is. Says Saniyath s mother.

Her friends and family members who meet her now can hardly believe the remarkable change they see in her. The bed-ridden, fever-ridden and despairing Saniyath is now a pass . The one you get to look at now and speak to is a cheerful and energetic young woman, who is exploring taking up higher studies after obtaining her graduation degree recently.

These surgeries have truly added Life to my Years. I can t thank God and Dr. Surej enough for helping me get rid of the pain I suffered for years together says Saniyath with a Genuine Smile.