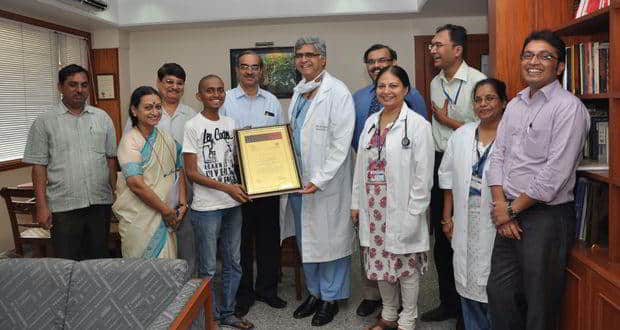 Cancer can be a debilitating disease and even after surviving the disease it can turn a patient's life topsy-turvy. It can seriously hit a student's academic plans and take away the joy of learning. However the Tata Memorial Hospital along with the YCMOU has come up with a solution to that problem.

Many young cancer patients will now have a chance to enrol themselves in short-term courses in photography, animation and painting and get on with the wonders of learning, otherwise frequently disrupted by the disease. Nashik-based Yashwantrao Chavan Maharashtra Open University (YCMOU) will soon roll out these vocational courses for young patients - mainly in their teens and also early 20s - of the Tata Memorial Hospital in Mumbai, an official said. University vice chancellor R. Krishnakumar took the lead when he read about a 21-year-old student, Vaibhav Shinde, and his zeal for learning despite suffering from leukaemia.

"When I came across Vaibhav and his will to learn and educate himself, I was filled with appreciation for his desire. After reading about him, I had an urge to contribute in his life and hence we enrolled him for a course in our university," Krishnakumar told IANS. Krishnakumar said it was, however, not easy for Vaibhav to keep up with his studies regularly. "From there stemmed the idea of establishing a study centre within the premises or near the Tata Memorial Hospital," he said.

"There are several teenaged and young patients in the hospital who seem to have lost the will to live because of the disease. They drop out of their schools or colleges eventually. While not much can be done to help with this, we thought we will come up with short-term vocational courses like photography, animation and painting to keep these young patients occupied," he added.

The university is in talks with officials at the Tata Memorial Hospital to kick-start the study centre by the next academic year. However, for Vaibhav, who was suffering from leukaemia for the past three years, it was difficult to keep up with studies while undergoing long days of treatment at the Tata Memorial Hospital in Mumbai. A resident of Raigad district, he had enrolled for a graduation degree in information technology, but had to drop out of college owing to health reasons. The YCMOU not only enrolled him in a graduate course in computer application but also waived his tuition fees and other expenses.

"But this was not enough. I saw the boy struggling hard to strike a balance between his studies and his cancer treatment. So we gave him a certificate to appreciate his urge to be a learner," Krishnakumar said. "I have seen Vaibhav's zeal to learn. In spite of suffering from this disease, he has come across as a happy and smiling child. We appreciate the efforts of YCMOU to fulfil his desire to learn," said Tushar Vora, who has been treating Vaibhav.

Vora said he is looking forward to having such a centre in the hospital premises, which will be of great help to young cancer patients who have an entire lifetime to look forward to. "Vaibhav has been such a model student and patient that we are working out a schedule for him so that the treatment sessions do not clash with his exams or study hours," Vora said.

Giving more details about the type of courses YCMOU intends to start at the hospital, Anuradha Deshmukh, director of collaborations and initiatives at the university, said they are also keen on several preparatory courses for patients aged 14-16 years. "We will be looking at the database of young patients at the hospital and will work out short-term preparatory courses that can help teenagers find a direction in their career," she said. "We look forward to designing study modules not only in the form of books but also in the form of multimedia, making it more interesting for young patients," she added.

Deshmukh also appreciated the proactive attitude of doctors at the hospital who were ready to work on the treatment schedules of all these patients/students keen on learning. The university has also enrolled Vaibhav's younger brother and waived his tuition fees as he had to drop out of college to look after his brother.

Every year nearly 43,000 new patients visit the hospital from all over India and neighbouring countries. Nearly 60 percent of these cancer patients receive primary care, of which over 70 percent are treated almost free of cost. Over 1,000 patients attend the OPD daily for medical advice, comprehensive care or for follow-up treatment.