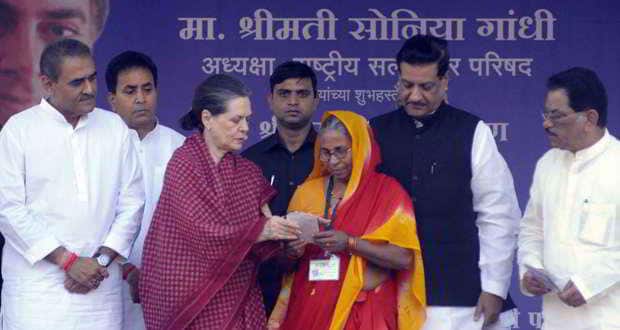 Gandhi said the Congress-led government at the centre was committed to the welfare of the common man and the health insurance scheme will benefit the poor, especially rural women and children.

The RGJAY aims to provide free and quality critical medical care in both government and private hospitals to people below the poverty line and above poverty line, with an annual family income of around Rs.100,000.

The state government had launched the project on a pilot basis in July 2012 in eight of the state's 35 districts, benefiting around five million families.

The government pays the premium of Rs.333 per family for an insurance scheme of upto Rs.150,000 and provides treatment option for 972 surgeries, therapies, procedures and 121 follow-up processes.

The RGJAY intends to cover more than two crore of the state's 12 crore population in the next few years and extend to more later.

Besides getting free treatment, patients will be entitled to post-medical care, medicines and return journey expenses from their place of residence to hospitals, Gandhi said.

She said that henceforth, poor women especially in rural areas would not have to hide their ailments to avoid burdening their husbands with medical bills and treatment expenses.

Gandhi also met and spoke to the first 78 beneficiaries of the scheme present at the venue.

She urged all poor people to take full advantage of the RGJAY as medical expenses are now beyond the reach of the common people.