International Arogya 2017 will display the strength and might of traditional Indian system of medicine like Ayurveda and Unani globally. 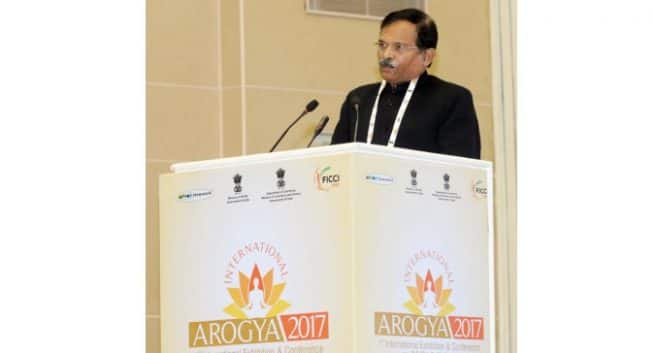 International Arogya 2017, the first international conference and exhibition on AYUSH and wellness systems organized by FICCI in collaboration with Ministry of AYUSH, Ministry of Commerce & Industry, and Pharmexcil, began here today in the presence of more than 1,500 delegates from India as well as visitors and hosted delegations from over 60 countries. The four-day event is being held in the backdrop of the National Health Policy 2017 strongly advocating mainstreaming the potential of AYUSH within a pluralistic system of Integrative healthcare. It will showcase the strength and scientific validation of traditional Indian systems of medicine in the global context, including Ayurveda, Yoga and Naturopathy, Unani, Siddha, Sowa-Rigpa and Homoeopathy (AYUSH), and facilitate their worldwide promotion, development and recognition. Also Read - Want to boost overall health? Have apple cider vinegar

Delivering the special address at the inauguration ceremony, Shri Suresh Prabhu, Hon ble Minister of Commerce & Industry, Govt. of India, said: In the recent past, we have seen a resurgence of interest in traditional systems of medicine due to their enormous utility in tackling lifestyle disorders. People from across the world are coming to India for health-restorative cum alternative treatments. With a wealth of 6,600 medicinal plants, India is the second largest exporter of AYUSH and herbal products in the world. We now have an opportunity to mainstream the Indian system of medicine and integrate the AYUSH infrastructure into Indian healthcare system. This infrastructure consists of 1,355 hospitals with 53,296-bed capacity, 22,635 dispensaries, 450 undergraduate colleges, 9,493 licensed manufacturing units, and 7.18 lakh registered practitioners. We want to tap the maximum potential of AYUSH systems in imparting preventive, promotive and holistic healthcare to the people.

Talking about the India opportunity, Shri Suresh Prabhu said: The Indian domestic market of AYUSH is estimated to be Rs 500 crore, while exports amount to Rs 200 crore. Young Indian entrepreneurs planning a start-up could find a lot of opportunities in holistic healthcare. The Government has allowed 100% FDI in AYUSH. The AYUSH industry is expected to grow in double digits and provide direct employment to 1 million people and indirect employment to 25 million people by 2020. All stakeholders need to pool their resources to harness this vast potential. Read here President Ram Nath Kovind: Doctors should integrate AYUSH

Shri Shripad Yesso Naik, Hon ble Minister of State (Independent Charge), Ministry of AYUSH, Govt. of India, said: The patient-centric approach of AYUSH systems holds significant potential for finding solutions to India s public health challenges. The Government has taken many initiatives to popularize alternative systems of medicine. The National AYUSH Mission was started in 2014. An agreement has been signed with WHO to develop benchmarks for Yoga, Ayurveda, Unani and Panchkarma. Five AYUSH information cells have been set up in Israel, Tajikistan, Peru, Russia and Tanzania. The All India Institute of Ayurveda has been established at Delhi. The Government is offering incentives to AYUSH industry for international cooperation and encouraging certification of AYUSH products to facilitate exports. The AYUSH Premium Mark is part of a new, voluntary quality certification scheme to ensure efficacy of Indian herbal products. There is now sufficient momentum to bring the traditional systems of medicine to a higher pedestal in healthcare.

More than 250 manufacturers of alternative medicine are showcasing their products and services at International Arogya 2017. The mega event has brought key stakeholders of AYUSH sector together under one roof to showcase latest research and developments in alternative medicine systems of India and boost exports of AYUSH products.

Addressing the august gathering Dr. Sanjaya Baru, Secretary General, FICCI, noted that India has a long history of using traditional medicines in healthcare, and developing them with modern scientific outlook. He said: We are witnessing a highly receptive environment where the value of AYUSH systems is widely recognized worldwide, translating into growing global demand. A slew of reforms in administration, research strategies, nature of practice and education are underway, leading to heightened interest in the AYUSH system of medicine, both in India and abroad. Dr. Baru thanked the Ministry of AYUSH and Ministry of Commerce & Industry, Govt. of India, for taking the initiative to organize International Arogya 2017, which will enhance the export of AYUSH medicines and products.

Mr. A. Jayakumar, Secretary General, World Ayurveda Foundation, said that International Arogya 2017 is a key initiative taken by the Indian Government and FICCI. He said: The World Ayurveda Foundation has partnered with the Government of India and FICCI for International Arogya 2017. We are also pleased to work with FICCI for the growth of AYUSH sector. In the years to come, this partnership will grow further. He welcomed all the Indian and international delegates at the event.

A White Paper titled “AYUSH for the World” by Frost & Sullivan was launched to offer insights into the regulatory requirements for herbal medicines in ASEAN and BIMSTEC nations. The document notes that India is the second largest exporter of Ayurvedic and alternate medicines to the world and has a potential to generate three million job opportunities. The Indian herbal market is valued at Rs 5,000 crore currently, with an annual growth rate of 14%. More than 30,000 branded and 1,500 traditional AYUSH products are available in the country. India is the world s second largest exporter of medicinal plants after China and both the countries together produce more than 70% of the total global demand for herbal products.

Said Sandeep Sinha, Vice President, Transformational Health (Healthcare) Practice, Frost & Sullivan: Frost & Sullivan is very happy to be a part of FICCI International Arogya 2017 as the Knowledge Partner. The event has brought together industry thought leaders, manufacturers and exporters of AYUSH products, along with Ministry of Commerce, Ministry of AYUSH, Pharmexcil and other key stakeholders. In the last few decades, traditional and herbal treatments have gained international acceptance and people are increasingly opting for these treatments owing to their safety, efficacy, cost effectiveness and resonance with the modern quest for a healthy lifestyle. The Frost & Sullivan whitepaper launched at International Arogya 2017 is a facilitation roadmap for AYUSH regulations and registration in ASEAN and BIMSTEC countries, to unlock value and realize maximum potential of AYUSH benefits and access to the world.”

A major highlight of International Arogya 2017 was Indian CEOs Roundtable, chaired by Shri Shripad Yesso Naik, Hon ble Minister of State (Independent Charge), Ministry of AYUSH. The event has host sessions built around themes like: Enhancing the export potential of AYUSH; Business opportunities in integrative healthcare; Building a brand strategy; Standardization and quality control in AYUSH sector; and Workshop on essential herbal Raw Materials required in AYUSH Industry. There is also a meet of international regulators, with regulators from ASEAN and BIMSTEC countries, Canada and Switzerland participating. Free health check-up and consultation, Counseling by Specialists, lectures on AYUSH, Yoga demonstrations and naturopathy sessions will be the main attraction for the public on the last day of International Arogya 2017 on December 7.

Alcohol destroys your skin by staying in your system for 28 days! 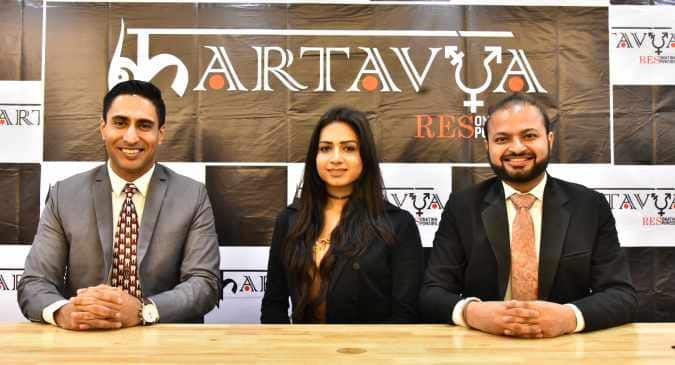