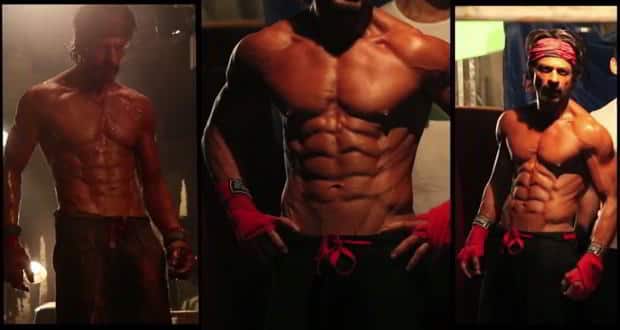 Shah Rukh Khan who made headlines by flaunting his 10-pack abs in Happy New Year, recently shared a video of him sweating it out and pumping iron in the gym, on the movie set, etc. Throughout the video the actor is shirtless and shows off a very ripped body. He is seen doing the following: Dumbbell Shrugs, Dumbbell Biceps Curls, Deadlifts, Dumbbell Rows, Dumbbell Bench Presses, Front Raises, Push-ups, Hanging Leg Raises and Pull-ups.

The video was part of Hrithik Roshan's ongoing Bang Bang Dare where he challenges actors to do some physically challenging activity be it a handstand push-up, parallel bar dips, and more. He had challenged SRK: 'The 10pack #bangbangdare @iamsrk show us a picture of you doing your favourite ab exercise! We all want to know which one it is! You have 3 days Qabool?'

In response to this challenge, SRK put up this video instead of an image and replied, '@ihrithik #bangbangdare my fav ab workout is to do all exercises. A Dirty gym/ Prashant 2 help & Farah to scream.'

The timing of the video is even more interesting considering the media stories about his great rival Salman Khan's fake abs in Ek Tha Tiger. A source told Mumbai Mirror, 'Salman was shocked that the film's director, Kabir Khan, had edited out his shirtless shot. The actor called up the producer and said that if it wasn't incorporated, his fans would be disappointed and Brand Salman would take a beating. And that was the reason why the computer graphics came into play.'

Only recently, a simple poll asking which Khan Salman, Shah Rukh or Aamir had the best abs went viral with Shah Rukh and Salman fans going to great lengths to vote for their heroes.

For more articles on celebrity bodybuilding secrets, check out our celeb bodybuilding section.Follow us on Facebook and Twitter for all the latest updates! For daily free health tips, sign up for our newsletter. And for health-related queries, visit our Questions and Answers section.