SRK hospitalised again, says could own a hospital if they had Frequent Fliers Miles

Bollywood superstar Shah Rukh Khan underwent a successful arthroscopic surgery of his left knee and has been advised complete bed rest for four days. The 49-year-old actor, who was shooting Rahul Dholakia's 'Raees' until before the surgery ignoring the knee pain, has thanked his fans for standing by him in his tough times. 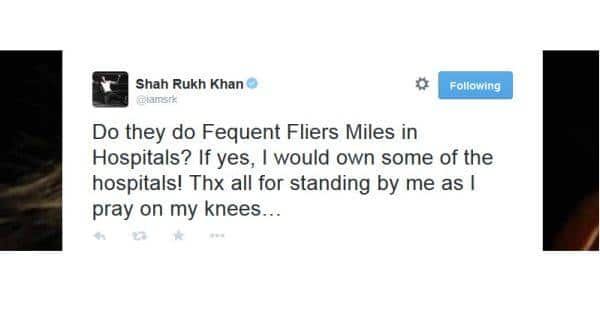 'Do they do Frequent Fliers Miles in Hospitals? If yes, I would own some of the hospitals! Thanks all for standing by me as I pray on my knees...,' Shah Rukh posted on Twitter. Sanjay Desai, who operated on the 'Happy New Year' star, said, 'SRK has undergone Arthroscopic surgery of left knee at Breach Candy Hospital. Khan has been suffering from repeated pain and swelling of left knee over the last several months... He has recovered well and is likely to be discharged tomorrow.'

Shah Rukh is expected to resume shooting after a short break. The actor had been through many injuries. During the promotion of Farah Khan's 'Happy New Year' last year, he hurt his knee. He even shot Yash Raj's 'Fan' despite a muscle pull.