Alois Alzheimer identified dementia more than a century ago. Now, researchers have validated his diagnosis, basing their analysis of the original patient's brain, revealing its genetic origin. In 190

Alois Alzheimer identified dementia more than a century ago. Now, researchers have validated his diagnosis, basing their analysis of the original patient’s brain, revealing its genetic origin. Also Read - Noonan syndrome with multiple lentigines: Have you heard of this disorder before?

In 1901, Auguste Deter, a middle-aged female patient at the Frankfurt Asylum with unusual symptoms, including short-term memory loss, came to the attention of Alzheimer. When she died, Alzheimer examined her brain and described the distinctive damage indicating a form of pre-senile dementia. Also Read - Researchers discover role of mutation in blood cancers

‘It is extremely satisfying to place this last piece in the medical puzzle that Auguste Deter, the first ever Alzheimer patient, presented us with,’ said Manuel Graeber, professor from the University of Sydney, the journal Lancet Neurology reported. ‘Alzheimer was a founding father of neuropathology, an important medical specialty that is still underrepresented. His ability to recognise this dementia more than a century ago provides compelling support for specialisation in medicine,’ said Graeber, according to a university statement. Also Read - Father's X chromosome holds clues to autoimmune disease in women

The particular brain specimen was discovered in a university basement late last century after a search by rival teams of academics. For years scientists have been wondering whether the first case of Alzheimer’s disease had a genetic cause. For decades the more than 200 slides that Alzheimer prepared from Deter’s brain were lost. Then in 1992, after Graeber uncovered new information pointing to their location, two teams of medical researchers began a dramatic race to find them. One team searched in Frankfurt but it was a team headed by Graeber, then working at the Max Planck Institute for Neurobiology, that finally located the material at the University of Munich in 1997. The slides were examined and confirmed beyond doubt that Deter was suffering from Alzheimer’s disease.

Since their rediscovery, a significant number of brain slides have been under the official custodianship of Graeber who has been at the University of Sydney since 2010. He is preparing a book on the material. ‘We have revealed that Auguste Deter is one of those in which early onset of the disease is caused by mutation in a single gene,’ said Graeber.

Graeber, from the University’s Brain and Mind Research Institute, Sydney Medical School, teamed up with Ulrich Muller from the Institute of Human Genetics of the University of Giessen in Germany to produce the molecular diagnosis. 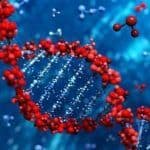