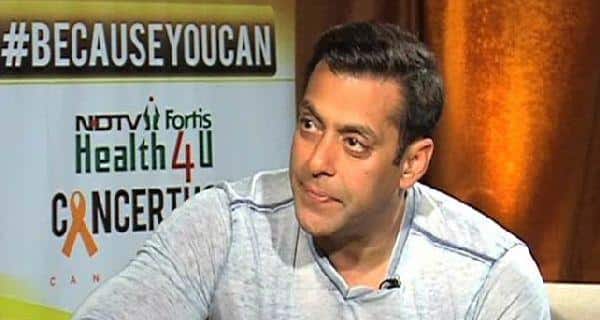 Tell you whether a man is a sexist or not -- Who thought a smile can be a gateway to a man's beliefs. A study published in the journal Sex Roles says that you predict whether a man is sexist or not on a first date by watching how he smiles, his attitude and the kind of words he uses while interacting with women. The study says that men who smile less, are less approachable and are less friendly in their speech are more likely to be sexist.

NDTV on Feb 8, organised a ‘Cancerthon’ in association with Fortis Healthcare to spread awareness about the deadly disease-cancer. The event highlighted many problems associated with getting proper treatment for diseases like cancer in India. Lack of awareness, high end costs involved with the diagnosis and treatment of cancer were cited as few of the many reasons that worsen cancer statistics in the country. (Read: World Cancer Day: Latest research and advances in cancer treatment) Also Read - Small delays in cancer treatment can up death risk by 10%, says study

Several celebrities like Bollywood superstar, Salman Khan graced this occasion and loaned his voice in spreading awareness about cancer. He emphasized the need to diagnose cancer early and urged people to not be scared and get regular check-ups done and not to fear that something serious might crop-up. He said that it is better to that a disease as serious as cancer is diagnosed in the earlier stages rather than later. He also shared his mantra for a fit lifestyle. He said a healthy lifestyle is must for every person. He said that he works out regularly, he takes care of his diet. He also urged people to not smoke and stay away from gutka. (Read: World Cancer Day 2015: 10 myths about cancer busted!) Also Read - Exercise regularly in the morning to bring down your risk of breast, prostate cancers

Another Bollywood celebrity and former Miss Universe, Diana Hayden was also present at the ‘Cancerthon’. She revealed that she lost her grandmother to cancer and due to lack of advance techniques then, and her grandmother suffered from more from radiation that burnt up her leg rather then cancer itself.

Bollywood singer Mohit Chauhan also tweeted to urge people to donate with all their hearts and support NDTV’s cause. 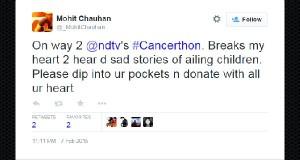 Kiran Majumdar Shaw, Chairperson & MD of BIOCON also joined the ‘Cancerthon’ and spoke about the advancement in cancer research. She highlighted that if cancer is contained and localized, it can be cured. She also informed that research now focuses on preventing the escape of cancer cells from the area of its origin.