Real Madrid VS Atletico Madrid: How bad is Cristiano Ronaldo’s back injury? 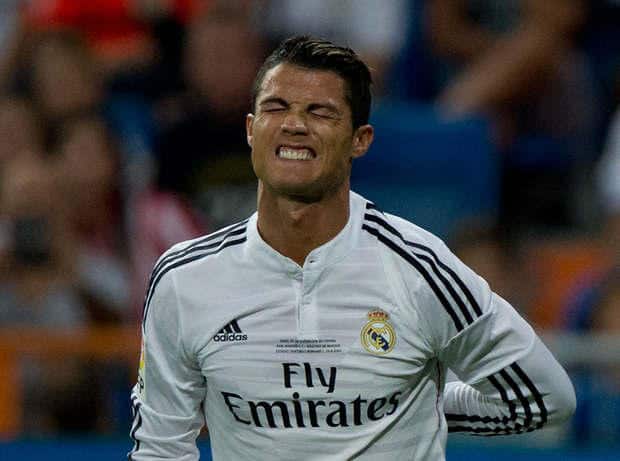 Carlo Ancelloti dismissed suggestions that Cristiano Ronaldo is set to spend an extended amount of time on the treatment table with an apparent back injury. Ronaldo picked up the injury in Tuesday's Spanish Super Cup match between Real Madrid and Atletico Madrid. Ronaldo was replaced at half-time by James Rodriguez. 'Cristiano had strain and was not comfortable. Tests tomorrow. At first it does not seem so serious,' the Italian told reporters.

Cristiano Ronaldo had an underwhelming World Cup by his high standards and there were reports that he was carrying a knee injury which prevented him from playing properly. A Portuguese surgeon had warned Cristiano Ronaldo that he could be putting his future in jeopardy by continuing to play with a knee injury. According to Spanish online newspaper El Confidencial, Portuguese surgeon Jose Carlos Noronha told the 29-year-old: 'Let your knee rest, or your future is in danger', to which Ronaldo reportedly replied: 'I'm the one that says whether I'm playing or not.'

Popular men's magazine Men's Health declared Cristiano Ronaldo the fittest man alive. The magazine stated how that not only is Ronaldo faster than other players but according to Zoe Wimshurst, PhD, director of Performance vision he's able to process the game faster in his head. He also has crazy stamina which sees him run 6m miles a game, and is found sprinting at a top speed of about 21 miles/hour. In fact, so good his all-round game that he can leap at least 31 inches which is similar to the jumping ability of NBA superstars! Of course this accolade is no surprised since Cristiano was also voted the fittest player of the FIFA World Cup 2014 by the readers of TheHealthSite.com.

Ronaldo works out five days a week according to the schedule of the game and follows a strict regime training for three to four hours a day! To maintain the his fat levels (maintaining less than 10%), he practises for 3-4 hours daily, runs around 25-30 minute every day to boost his cardiovascular health , and also does sprinting drills explosive and high intensity exercises. Of course, Ronaldo has to keep in mind that he doesn't bulk up too much since his agility and pace are his most powerful weapons. Read on to find out more about Cristiano Ronaldo's diet and fitness regime