Priyanka Chopra Face Injury: What Happened To Her On The Sets of 'Citadel'

Priyanka Chopra's bloodied post left her fans baffled. So what exactly happened on the Citadel set? Was Priyanka Chopra actually injured or this was just a part of her makeup?

Bollywood actress Priyanka Chopra on Wednesday shared a bloodied selfie from the sets of Citadel. Taking to Instagram, the actress shared picture stories where she could be seen with some cut marks on her eyebrows. Sharing the pictures, she also asked her fans to figure out what was real and what was not? The pictures left her fans scared. However, later on, the actress revealed that the injury on her forehead was the real one and the one on the cheek was just makeup. Haven't checked the photo yet? Here, take a look: 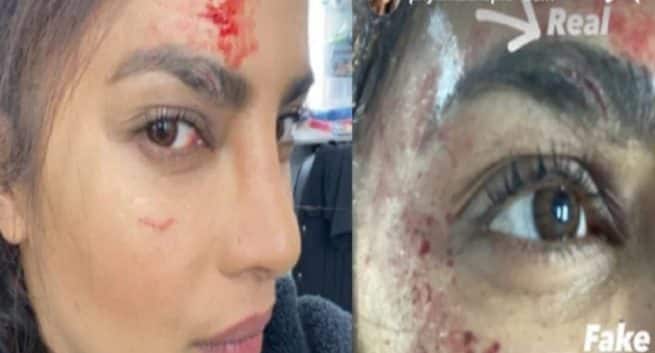 Dressed in a black outfit, Priyanka shows her bruised face in the selfie. Some blood marks can be seen under her nose and on her lips and chin. She captioned the picture, 'Did you have a tough day at work as well? #actorslife #citadel #adayinthelife @agbofilms @amazonstudios.' Check the picture HERE:

Soon after her post went online, fans started asking about her health, and comments started pouring in from all sides.

What Happened At The Citadel Set?

Priyanka Chopra's bloodied post left her fans baffled. So what exactly happened on the Citadel set? Was Priyanka Chopra actually injured or this was just a part of her makeup? Well, the actress revealed that some cut marks were real where as some were makeup. So, seeing the latest post we can say that the actress is actually putting her blood, sweat and tears into the project.

Last week, on the occasion of Mother's Day, the actress introduced her daughter to the world. Sharing a picture of herself along with Nick Jonas and little Malti Maire, the Don actress said, "On this Mother's Day, we can't help but reflect on these last few months and the rollercoaster we've been on, which we now know, so many people have also experienced. After 100 plus days in the NICU, our little girl is finally home."

Talking about the current project that the actress is handling, sources said that apart from Citadel, Priyanka Chopra will also appear in The Matrix Resurrections as Sati. She will also feature in It's All Coming Back to Me and Jee Le Zaraa.

Is It Delta or Omicron or Lambda? CoVarScan Rapid COVID Test Can Identify Variants In Hours