Surfers have a reputation of being laidback. But a study suggests otherwise. According to researchers, top surfers require peak level aerobic fitness with the right combination of strength, power and

Surfers have a reputation of being laidback. But a study suggests otherwise. According to researchers, top surfers require peak level aerobic fitness with the right combination of strength, power and endurance to stay competitive and in shape. Also Read - Watch: Katrina Kaif and Siddhant Chaturvedi playing badminton is the fitness inspiration you need

Researchers from Auckland University of Technology (AUT) Sports Performance Research Institute New Zealand (SPRINZ) have shown how physically demanding it is for surfers to stay at top levels, with their heart beating for a maximum of 190 times per minute, being above 120 for over 80 percent of the time. Also Read - Why you should incorporate aerobic exercise into your routine?

The research, which Oliver Farley presented in his Master’s thesis at the AUT, is the first of its kind in the world. The findings have been published worldwide, surfing websites, including a piece in the New York Times. Also Read - Atrial fibrillation: When your heart doesn't beat in the right rhythm

The genesis of the research was a conversation Farley had with SPRINZ associate director Nigel Harris while he was doing his Postgraduate Diploma in Sport and Exercise, according to an AUT statement. ‘I was just finishing my quantitative research proposal assignment on surfing, and when I approached Nigel about the idea for a thesis the following year we found that there wasn’t much research done on this subject. Nigel was great,’ said Farley.

Farley enlisted some of the country’s top surfers, including Maz Quinn, who were competing at national level events to be his subjects. He modified a kayak ergometer machine in his garage to measure the power outputs and peak oxygen uptakes. To measure the intensity and distance covered, he fitted the surfers out with GPS and heart rate monitors while videoing them. ‘They were a bit reluctant at first because they (the GPS monitors) were a bit bulky. But after seeing the first round of results they, being competitive guys, wanted to know how they were going against their mates,’ added Farley. 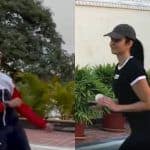