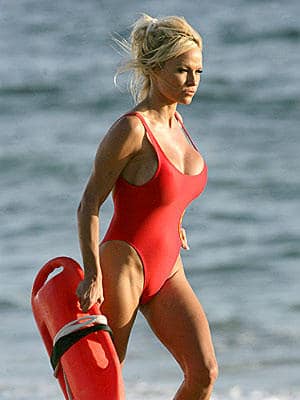 Guess running slow motion on Baywatch is not quite the same as running a marathon. Former Baywatch star Pamela Anderson found it hard to run the recent New York Marathon and says it was a painstaking experience.

Anderson completed the race in five hours and 41 minutes.

Later, she took to Twitter to post a photograph of herself lying on a bed covered in bags of ice, reports nypost.com.

In an interaction with Ellen DeGeneres, the 46-year-old said: 'Yeah, I finished. It was hard. Those last five miles - it was like giving birth and then being told to run as you're giving birth. It was so much pain in my hips.'

'I don't know if women are meant to run, especially after having kids,' added the mother to two sons - Brandon and Dylan, whom she had with her former husband Tommy Lee.

After the run, she was spotted dining on pasta and salad at an eatery at Madison Avenue. (Read: Taking your marathon training to the next level)