In a remarkable breakthrough that could be a major blow against meningitis in poor countries, researchers say that WHO has given the green light to a key vaccine which can be transported or stored for

In a remarkable breakthrough that could be a major blow against meningitis in poor countries, researchers say that WHO has given the green light to a key vaccine which can be transported or stored for up to four days without refrigeration. This is remarkable keeping in mind that countries like Senegal and Ethiopia where the deadly infection often breaks out has no electricity, especially in rural areas. This will allow the vaccine to be stored for long stretches without losing its efficacy. Also Read - COVID-19 vaccine in India: SII submits more data for EUA approval, Bharat Biotech providing soon

The vaccine called MenAfriVac was the made by the Indian company Serum Institute costs less than 50 cent per dose and can be stored at temperatures as high as 104 degrees Fahrenheit (40 deg C) for four days. Also Read - After Pfizer, Serum Institute seeks emergency approval for COVID-19 vaccine in India

‘The potential for some vaccines to remain safely outside the cold chain for short periods of time has been widely known for over 20 years,’ said Michel Zaffran, director of a nonprofit collaboration with the WHO aimed at improving immunization systems and technologies.

He expected this announcement will lead to other vaccines being tested so that they can be stored without refrigeration. The findings, from a study of the vaccine carried out by Health Canada and confirmed by the World Health Organization Vaccines Pre-Qualification Program and the Drugs Controller General of India — were unveiled Wednesday at a conference in Atlanta.

Another research showed that the vaccine has been effective in reducing meningitis in Burkina Faso, the first country to introduce the vaccine in 2010. Not only was the disease not noticed in the vaccinated children but those that hadn’t received the vaccine it also didn’t have the disease.

Just two years later, the bacteria that causes meningitis A had been eliminated, not only in those who received the vaccine, but in others around them,’Our findings show that the bacteria causing meningitis A have disappeared from the noses and throats of those too old or too young to have received the vaccine, resulting from a phenomenon known as ‘herd immunity,’‘ said Marie-Pierre Preziosi, director of the Meningitis Vaccine Project.

‘And we can also show that after introduction in Burkina Faso, we saw the lowest level of epidemic meningitis in 15 years,’ added Preziosi, the lead author of the study, which will appear in Clinical Infection Diseases.

Meningitis A is a bacterial infection that affects the membrane of the brain. It can cause brain lesions and has a 50 percent fatality rate when left untreated, according to the WHO. Viral meningitis is generally less severe, with most patients fully recovering on their own within a week or two. 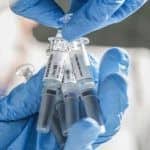