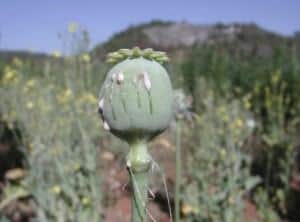 A 32-year-old Nepali national has been arrested for trafficking narcotics to Europe, police said Wednesday after 13 kg opium was recovered from the man.

The opium has been estimated to value Rs.3 crore in the international market.

Jogte Tamang, who used to supply opium in bulk to Europe through couriers via Delhi, was arrested from Nigam Bodh Ghat area Tuesday.

'Tamang had come to deliver the consignment of 13 kg opium to one of his contacts at Nigam Bodh Ghat when he was arrested,' said Additional Commissioner of Police Ravindra Yadav.

'We have recovered two bags from his possession carrying 95 pairs of shoes in which he had concealed the opium wrapped in silver foil in small pieces,' said Yadav.

Tamang came in contact with an international drug syndicate in Nepal in June.

He had brought two such consignments of 16 kg opium which were handed over to him in Kathmandu by a man named Jebba, another member of the syndicate.

'The kingpin of the gang, Bire, had directed him to bring this consignment to Delhi,' the police officer said. (Read: Arjuna awardee Jagdish Bhola admits to running an international drugs racket)