India, which reports more than half of the new leprosy cases in the world each year, must take steps to make the inhabitants of the 850 leprosy colonies across the country join the mainstream, experts

India, which reports more than half of the new leprosy cases in the world each year, must take steps to make the inhabitants of the 850 leprosy colonies across the country join the mainstream, experts said here. “Efforts should be made to improve their condition and make them join the mainstream of society,” said V. Narsappa, head of National Forum of India which has been working among leprosy patients. Around 15,000 leprosy patients, many of who are cured, stay in the leprosy colonies, along with their families including children who do not suffer from the disease. Also Read - Nippon Foundation and DPI pledge to bring dignity to leprosy affected: Global Appeal 2018

“The leprosy patients, including the children, suffer discrimination, due to myths and misconception,” he said at the International Symposium on Leprosy and Human Rights in Asia here. India has seen a decline in new leprosy cases over the years. From a figure of five lakh in 1992, the cases have declined over the years to 130,000 this year. Except for 2001 when new cases peaked at six lakh, said S.K. Noordeen, chairperson of Sasakawa India Leprosy Foundation run by the Nippon Foundation.

“Chhattisgarh, Odisha, parts of Bihar and Uttar Pradesh and also West Bengal report leprosy cases. In Chhattisgarh, health workers are unable to venture into the deep forested pockets where Maoists hold sway,” Noordeen told IANS on the sidelines of the event. India reports 58 percent of new leprosy cases each year, followed by Brazil. Indonesia, Ethiopia, Nigeria and Mozambique are the other countries that report high leprosy cases, said Noordeen. The worldwide new cases currently stand at 230,000. In 2001, the peak year, the cases stood at 7,50,000, with India contributing to six lakh cases alone.

At the symposium, Members of Parliament said they would ensure implementation of the Principles and Guidelines in India and address the issue of stigma against leprosy.  Minister of State for Human Resource Development D. Purandeswari assured that parliamentarians “would do whatever is needed” to help leprosy patients. With the effectiveness of the Multi Drug Therapy, the cases now stood at one per 10,000. “However, one must not slip into complacency,” she said. Trinamool Congress MP and former minister Dinesh Trivedi and Congress MP Madhu Goud Yaskhi also attended the event, which was organised by Sasakawa-India Leprosy Foundation and The Nippon Foundation.

US consul in Hyderabad to support breast cancer awareness drive 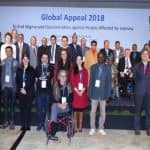