"For every 40 mothers who follow the healthy diet and moderate exercise, one less woman will end up with a cesarian section,"

Indulging in moderate intensity aerobics exercises and stationary cycling during pregnancy may decrease the risk of having a caesarean section (C-sec) or developing diabetes, a study has shown. Half of all women of childbearing age worldwide are overweight or obese, which puts both mother and the child at risk in pregnancy and later life, the study said. Dieting combined with physical activity significantly reduced the mother’s weight gain during pregnancy by an average of 0.7 kg. It also lowered the odds of the mother having a caesarean section by about 10 per cent, the research revealed. Caesarean section can carry risks such as infections for the mother and breathing difficulties for the baby. “For every 40 mothers who follow the healthy diet and moderate exercise, one less woman will end up with a caesarean section,” said Shakila Thangaratinam, Professor at Queen Mary University of London (QMUL) in England. Changes in lifestyle reduced the risk of diabetes in pregnancy by 24 per cent, which normally affects over one in 10 mothers in pregnancy and increases risks of complications in mother and the baby. Also Read - These lifestyle changes may help obese pregnant women reduce health risks for their baby; study

“Our findings are important because it is often thought that pregnant women shouldn’t exercise because it may harm the baby,” Thangaratinam said. But the study, published in The BMJ, shows “that the babies are not affected by physical activity or dieting, and that there are additional benefits including a reduction in maternal weight gain, diabetes in pregnancy, and the risk of requiring a caesarean section”, she added. For the study, the team looked at the individual participant data for 12,526 pregnant women across 36 previous trials in 16 countries, which compared the effects of dieting and physical activity. (Read: 4 reasons you should think twice before opting for an elective c-section) Also Read - Exercise regularly during pregnancy for a safe delivery and healthy baby 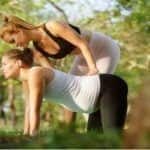