Meet the bisexual couple who live with their lover and children London, Nov 16: A married couple in Sweden has the same lover in their bed, who even lives together as a family. Erik Fridland, who met Hampus Engstrom while working as taxi drivers in Stroemsund, Sweden and fell in love with him, he confessed his affair to wife Linda, the Daily Star reported. Also Read - Ganesh Chaturthi 2020: 4 reasons an eco-friendly Ganesha is good for you

Woman suffering from sexual disorder has 90 orgasms every hour!

How a healthy diet can protect your kidney 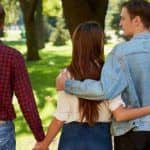