Malaria vaccine on the cards?

For the first time ever we could have a vaccine for the deadly malaria disease. Recently, British drug maker GlaxoSmithKline submitted for regulatory approval a vaccine which showed that it had cut th

For the first time ever we could have a vaccine for the deadly malaria disease. Recently, British drug maker GlaxoSmithKline submitted for regulatory approval a vaccine which showed that it had cut the number of cases in African children, reports bbc.co.uk. Understandably, experts are optimistic about finally seeing an end to the deadly disease that claims lakhs of lives around the globe each year. The vaccine known as RTS,S was found to have halved the number of cases in young children in the trial and reduced the number of cases by 25% in infants. Also Read - Ganesh Chaturthi 2020: 4 reasons an eco-friendly Ganesha is good for you

The vaccine is being developed with non-profit organisation Path malaria Vaccine Initiative and is supported by funding from the Bill and Melinda Gates Foundation. Also Read - This new experimental vaccine offers hope against malaria

Malaria is an infectious disease that is caused by plasmodium parasite which infects the red blood cells and is characterized by fever, body ache, chills and sweating. Similar disease has also been described in the holy Vedas. It derives its name from mal aria which means bad air in Italian. Of the four species that cause malaria (plasmodium vivax, plasmodium falciparum, plasmodium ovale, plasmodium malariae) plasmodium falciparum is the most serious and can cause serious complications. An individual can be infected with two species at the same time.

The life cycle of malaria is complicated and it involves two hosts- the human being and the mosquito. Once bitten by a female anopheles mosquito, the malarial parasite enters the blood stream. It travels all through his blood stream to reach the liver. In the liver the parasite matures and multiplies. Some of the parasites stay there whereas the other parasites move out from the liver attacking red blood cells. The parasite then multiplies in the red blood cells. In the next 48-72 hours, more parasites are released into the blood. This is the reason why the chills of malaria are generally seen after 48 to 72 hours corresponding to the release of the malarial parasite in the blood.

After been bitten by an infected mosquito, the disease takes around 14 days to manifest. Common symptoms are fever, chills, vomiting, nausea, body ache, headache, cough and diarrhoea. The cycle of fever and chills usually repeats after 48 hours (this corresponds to the release of parasite from the blood cell). After a few cycles of fever the person also develops anaemia due to breakdown of red blood cells. The spleen which is an organ situated beneath the rib cage on the left side enlarges and is felt in the stomach. Read more… 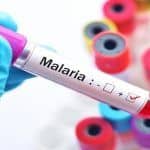