Keep diabetes and heart disease at bay: Cut down on red meat 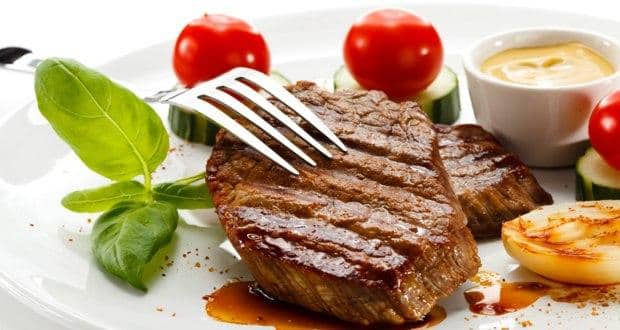 Red meat may be a delicious for some, but lowering your consumption of the delicacy will not only help reduce the risk of heart disease and diabetes, it also shrinks your carbon foot print by 12%. A new study has found that minimising the consumption of red and processed meat would not only lower the incidence of heart disease, diabetes, and bowel cancer by three to 12 percent, but also shrink the carbon footprint by 28 million tonnes a year, new research suggests. Previously published evidence shows that the risks of coronary heart disease, type 2 diabetes, and bowel cancer rise by 42 percent, 19 percent and 18 percent respectively, with every additional 50 grams of red and processed meat eaten daily.

Study co-authors Louise M. Aston, James N. Smith and John W. Powles from the University of Cambridge, Institute of Public Health, used responses to the 2000-2001 British National Diet and Nutrition Survey to estimate red and processed meat intake across the country's population. They published data from life cycle analyses to quantify average greenhouse gas emissions for 45 different food categories, the British Medical Journal Open reported. They then devised a feasible "counterfactual" alternative, based on a doubling of the proportion of survey respondents who said they were vegetarian - to 4.7 percent of men and 12.3 percent of women - and the remainder adopting the same diet as those in the bottom fifth of red and processed meat consumption, according to a Cambridge statement.

Those in the top fifth of consumption ate 2.5 times as much as those in the bottom fifth, the survey responses showed. Therefore, adopting the diet of those eating the least red and processed meat would mean cutting average consumption from 91 to 53 grams a day for men and from 54 to 30 grams for women. The calculations showed that this would significantly cut the risk of coronary artery disease, diabetes, and bowel cancer by between three and 12 percent across the population as a whole.

And this reduction in risk would be more than twice as much as the population averages for those at the top end of consumption who moved to the bottom end. Furthermore, the expected reduction in greenhouse gas emissions would amount to 0.45 tonnes per person per year, or just short of 28 million tonnes of the equivalent of CO2 a year. "Health benefits provide near term rewards to individuals for climate friendly changes and may thus 'nudge' humanity towards a sustainable future," suggest the authors.