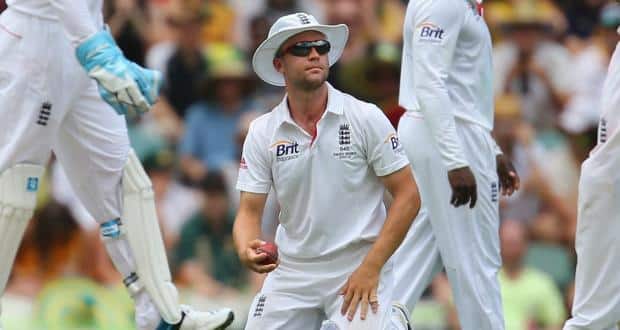 England batsman Jonathan Trott has pulled out of the Ashes tour citing a 'long term stress-related illness' and is taking an indefinite break from cricket to grapple with the issue. 'I don't feel it is right that I'm playing knowing that I'm not 100 per cent and I cannot currently operate at the level I have done in the past,' the 32-year-old said in a statement. 'My priority now is to take a break from cricket so that I can focus on my recovery. I want to wish my teammates all the very best for the remainder of the tour.' The South African-born batsman was already on the plane home by the time managing director Hugh Morris and head coach Andy Flower were explaining the reasons for Trott's abrupt withdrawal from the tour to the media Monday evening.

Trott had scored 19 runs in the two innings of the first Ashes Test, which England lost by 381 runs on Sunday, and struggled against the bowling of pacer Mitchell Johnson. Trott's display in Brisbane was described as 'poor and weak' by Australian opener David Warner, who also claimed that the No.3 batsman had 'scared eyes'.

England captain Alastair Cook dubbed the comments as 'disrespectful', a view shared by coach Andy Flower. 'Jonathan has been struggling with this condition for quite a while,' Flower said. 'We have been on tour for about a month and he has had his ups and downs through that month and it is not directly related to that.

'I would also say players commenting to fellow professionals in the media is disrespectful and I think on this occasion he (Warner) has got that horribly wrong.' 'Jonathan Trott is an incredibly talented cricketer who has proven himself time and again for England. The cricket side of things is unimportant now. All that matters is that Jonathan is given the time, support and space he needs to recover,' England's managing director Hugh Morris said. 'We fully support his decision to leave the tour and the ECB (England and Wales Cricket Board) will provide all the assistance we can to help Jonathan and his family through this period.'

Trott's decision to leave the tour midway is similar to the situation that led to former England opener Marcus Trescothick quit England's 2005-06 tour of India. The left-hander dropped out of the India tour without revealing his illness and travelled to Australia for the 2006-07 Ashes. He left Australia just two weeks into the tour. Trescothick's illness cut short his international career but he kept playing county cricket for Somerset. Trescothick tweeted Monday: 'Sad news, hope trotty is ok.'

In the hectic cricketing schedule, more and more cricketers are susceptible to not just physical injuries, but the psychological challenges that are part and parcel of a sporting career. Abhijit Banare looks at cricketers who have set an example by dealing with mental health problems.

Vinnie Jones was considered a hard man on the football field. When Andrew Flintoff interviewed Jones as part of the BBC documentary Hidden Side of Sport, very few could believe that Jones, such a colourful footballer in the '90s, once walked into the woods with a gun in his hand thinking of ending it once and for all. Jones, now 48, is a successful actor and speaks about depression openly and said in one of his interviews with The Guardian, 'It took me 40 years to see a psychologist. I often wonder how my life might have been different if it had been four years, or four months.'

Jones is just one of the many sportspersons Andrew 'Freddie' Flintoff spoke to in his documentary. Flintoff himself admitted being affected by depression. More significantly, the former England skipper broke the notion that sportspersons are strong enough not be affected by the talk around them. And it's interesting when he confronts Piers Morgan former tabloid editor on how journalists criticise the player without thinking of the pain they been through.

Before Flintoff, Marcus Trescothick was considered a classic example of someone who successfully fought depression and he was among the earliest sportsmen to reveal his condition. To recount a part of his career, the left-hander returned mid-way from the 2006 tour to India citing personal reasons. Trescothick shuffled his career returning and withdrawing far too many times before he admitted the real demon within depression.

In his book Coming Back at Me, the cricketer recounts various phases which he went through. Much has been written about the former England opener. However, what's equally essential to understand is the immense support that Trescothick received during that stage from the board and former players around him. Despite fighting such a long and exhausting battle, Trescothick said to The Guardian in 2011, 'You still get it at odd times, when you think something is going to happen. You're always only one step away from it and that's why you need to maintain the good things in your life.' His book was well-received and many other sportsmen came out in the open, finding it comfortable to discuss their problems. Read on