India has been deemed the world capital of 'open defecation'. In a statement the Drinking Water and Sanitation Minister Jairam Ramesh has plans to install 100,000 "bio- toilets" in 300 backward gram panchayats in the next two years. The total cost for this drive is estimated to be around Rs 150 crores. "We are the world's capital for open defecation. It is a matter of shame, anguish, sorrow, anger," Ramesh said, noting over 60 percent of all open defecation takes place in India. Speaking in the presence of mister of Defence A.K Antony, the ministers signed a memorandum of understanding (MoU) to install bio-digester- based eco friendly toilets. A common understanding was reached to rid the country of open defication in the next 10 years. Ramesh, who is also rural development minister, said DRDO-developed bio-toilet had immense use for Indian Railways. He said his ministry had offered to equip it in all new railway coaches and share half the cost of retrofitting it in all the existing 50,000 coaches in the next four to five years. The project will cost about Rs.500 crore. 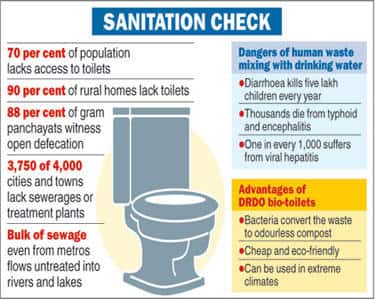 The minister said bio-toilets will also help curb manual scavenging which was still prevalent in about 15 lakh insanitary latrines. He said the ministry intended to provide bio-toilets to 1,000 gram panchayats over the next four-five years. The minister said that funds for setting up bio-toilets will be provided by his ministry and DRDO while its private partner will be responsible for technology. Ramesh said of 240,000 gram panchayats, only 28,000 had achieved the status of "nirmal gram" and his ministry intended that all panchayats achieve the status over the next 10 years. Antony said that bio-toilet was a spin off from technology developed by DRDO for eco-friendly disposal of human waste for armed forces deployed in high altitude locations.

Minister of State for Statistics and Programme Implementation Srikant Jena said he would write to MPs for keeping apart money from MPLADS scheme for installing bio-toilets in their area. DRDO bio-toilet is based on anaerobic biodegradation of organic waste by unique microbial consortium and works at wide temperature range. The consortium has been made through acclimatisation, enrichment and bioaugumentation of cold-active bacteria collected from Antartica and other low temperature areas.