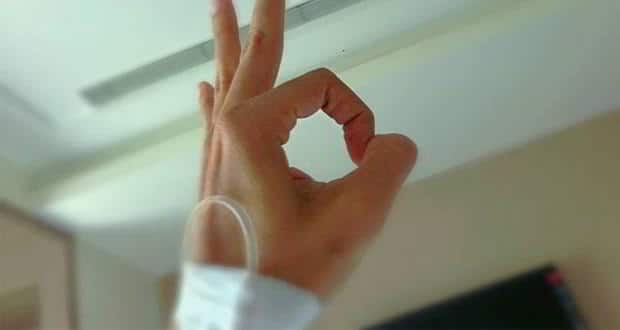 Mumbai (IANS) Bollywood actor Hrithik Roshan who recently underwent a brain surgery, reached out to his fans via social networking platforms on Tuesday to gesture that he is 'okay'.

Hrithik made the okay sign using the fingers of his left hand, while lying down on the bed at the Hinduja Hospital. A medical tube on his hand is visible in the photograph too.

The 39-year-old star also posted a message for his fans on Facebook: 'What's up! Hope everyone's making the best of their day! I'm horizontal but controlling and creating my environment to the best of my ability... That's all we ever need to do. Hope you're doing the same! I'm fantastic by the way! Thanks to all your love and wishes.'

Hrithik was diagonised with chronic subdural haematoma, and was admitted to the hospital on July 6 evening, and was operated upon the next day. He informed his fans of his surgery via the social networking medium too.

His spirit is not dampened, as was evident from an inspiring thought that he left behind for his fans.

'Leaving you with this thought - Everything can be taken away from you but one thing. The freedom of knowing one can choose their attitude in any given environment...Invent your own way! Love...supersonic style,' he added.

On Twitter, Hrithik did not miss the chance of wishing the best for his actor friend Farhan Akhtar, whose movie Bhaag Milkha Bhaag is ready to release this Friday.

'I believe 'Bhaag Milkha Bhaag' is phenomenal! Fills me up with bright light! Miss running with you Farhan Akhtar. Certain you will conquer the highest with this,' posted Hrithik.

9 Muscle-Building Foods That Are More Effective Than Protein Shakes

Benefits Of Pumpkin Seeds: Know How To Add Pumpkin Seeds Into Your Diet To Get Its Health Benefits, Watch Video