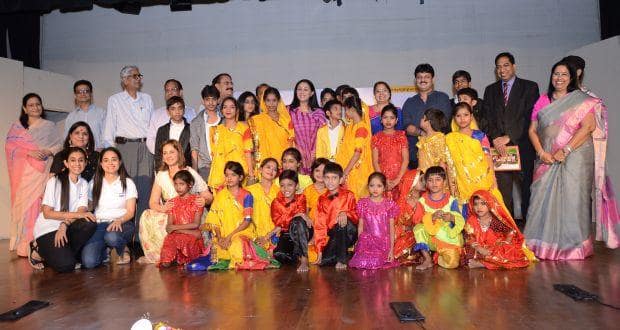 Some 50 HIV-positive children danced to a medley of Bollywood songs through the ages and staged an impressive play to a packed auditorium here over the weekend, as their adopted home, non-profit Rays Aasha Ki Ek Kiran, celebrated its annual day. The 45-minute satirical play, entitled 'Muhammad Bhai ki Jootiyan' (Brother Muhammad's shoes), sought to showcase how Indians may come from different states and speak different languages and dialects, but their cultural bonding and ethos remain the same.

The children's dance sequences to a medley of film songs depicted how Bollywood music and its lyrics have changed during the past seven-eight decades, not to mention how the stars have rendered these numbers in their own unique styles. The guests comprised Who's Who of Jaipur including D.R. Mehta, the former chairman of the Securities and Exchange Board of India (SEBI) and founder of the non-profit that fits 'Jaipur Foot' or artificial limbs for the needy people for free.

The guest list also included Rays' chief patron Diya Kumari, a member of the Rajasthan Legislative Assembly from Sawai Madhopur and a member of the erstwhile Japipur royal family, city Mayor Jyoti Khandelwal and specialist doctors who tend to the children. 'We started four journey four years ago with just four children. Today we have 50. By 2015, we are aiming for 75,' said Captain (retired) Gurinder Virk who left a lucrative job with Tata Consultancy Services to start Rays.

'We run our two shelters like a proper home for these children. With contributions from like-minded people, we take care of everything -- food, clothing, proper medication that is very important, their education and even entertainment,' Virk told IANS. 'What is unique about our home is: It is also managed by some HIV-positive women. They sort of become 'mothers' to similarly-affected children. So in our project the care-givers and the care-takers have a strong bonding,' said Rashmi Kuchhal, secretary, whom the children address as mother. (Read: Living with HIV diagnosis, treatment and prevention)

During the event, the organisers, the speakers and the presentations were focused on a key aspect about HIV-AIDS: The lack of awareness and the myths around it due to which innocent children -- who are not responsible for getting inflicted -- suffer the most. Evidence, they said, shows that HIV can'r spread from touch, tears, sweat or saliva. One also cannot catch it by breathing the same air as someone who is positive, using the same toilets, hugging, kissing, shaking hands or sharing eating utensils.

In this regard, Rays encourages the children to express themselves through plays and also organises other events like bike rallies to mark various occasions such as World AIDS Day. Last year, a bike rally was organised on World AIDS Day that was led by 'Ek Tha Tiger' director Kabir Khan to spread awareness and expressed solidarity with the HIV-positive fraternity. (Read: 9 factors that increase your risk for HIV)