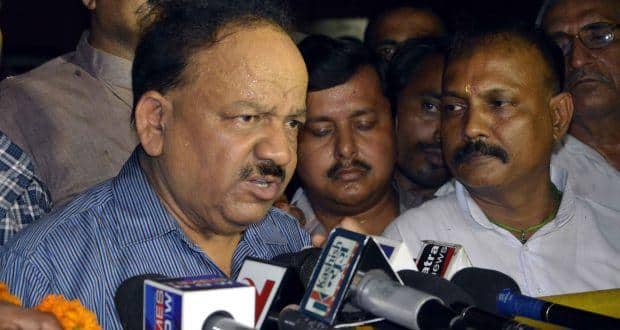 Health Minister Harsh Vardhan said Saturday that all systems in India's central hospitals have been placed under critical review to end 'systemic and symptomatic' corruption.

'In my first 90 days in office, hardly a day has passed without inquiring into the transparency of the ministry and its outposts. Very soon, the results are going to be in the public domain,' Harsh Vardhan said in a statement.

'There are many aspects to corruption in hospitals which as a medico I know exist. If money is made in the allocation of beds or as kickbacks from suppliers, it is sleaze. What is equally corrupt is the silent practice of reserving beds and facilities for employees or VIPs. I intend rectifying both these forms of corruption,' he said.

The minister said that shortly after assuming office, he has personally inspected all central hospitals in New Delhi including the All India Institute of Medical Sciences. He also visited four of the six new AIIMS and the National Institute of Mental Health and Neurosciences (NIMHANS) to suggest new ways to improve their services.

'I had stated on my first day in office that I will impose 500 percent transparency and adopt zero tolerance for corruption,' he added. On the controversy over the removal of vigilance officer Sanjeev Chaturvedi, the minister said: 'The re-profiling of Sanjeev Chaturvedi, deputy secretary posted at AIIMS with the powers of a chief vigilance officer (CVO), has generated a storm in some quarters'.

'Chaturvedi's designation as CVO was opposed by the CVC (Central Vigilance Commission) in 2012 and 2013. Disregarding the CVC's directives was part of a design to weaken the institution. In 2011, the then government had tried to demolish public faith in the CVC by appointing a tainted bureaucrat as its head. This appointment had been struck down by the Supreme Court. I therefore did my bit to restore the image of the CVC,' Harsh Vardhan said.

The minister said that claims that Chaturvedi was suspended or transferred were giving the issue a political slant and that he has neither been suspended, nor transferred'.