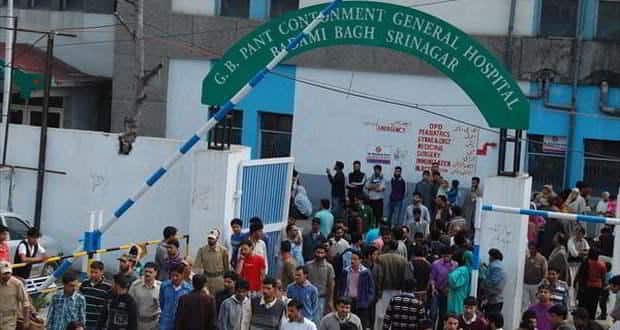 Between May 18 and 19, official sources said that that four more infants died in the G B Pant Children's hospital. Union Health Minister Ghulam Nabi Azad who hails from the state termed the infant deaths at the hospital 'a matter of shame'. Minister Omar Abdullah has asked retired doctor Muneer Masoodi to take up the Medical Superintendent's job. At least 362 infants have died at G B Pant hospital, the only paediatric hospital in Kashmir, since the beginning of this year. "My ministry had sanctioned two paediatric hospitals of 200 bed capacities each for Srinagar and Jammu cities. But the State government has not been able to set up these hospitals," Azad said. "Health is a state subject. It is the State government and not the Centre which is responsible for health care issues in J&K. While I was the Chief Minister of the state (2005-2008), we had allocated 70 kanals (560 acres) of land for the paediatric hospital. Two years ago as Union health minister, I released Rs 65 crore for it. But the same could not be utilised," he said.

The hospital is facing innumerable problem; lack of infrastructure, inadequate staff, insanitary wards, thrice the number of infant patients than they are equipped to handle . Doctors and hospital staff are adamant that the government has been ignoring their pleas for a long time. Official records suggest that the hospital admitted 4274 new born patients in 2011 and they recorded 475 neonatal deaths of which 320 were paediatric.

Doctors doing the best they can?

According to the medical fraternity in the Valley the doctors are doing the best they can with the resources at hand. Official records at the GB Pant hospital show that out of 1229 admissions 358 children died in 2012. The number of deaths in January was 68 while in February the figure stood at 66. In March 105; in April 85; in May (up to 12th) 34 deaths occurred. 'We will be adding more trained and technical staff, and soon tenders would be floated to add some more infrastructures to the hospital. We would be happy if the government provides us more equipment, but unfortunately the G.B Pant Hospital has become a victim of official apathy,' a senior paediatrician at the hospital said, asking not to be named.

The hospital has a capacity of 135 patients; however official records suggest that they get around 120 patients every day including back admissions and this leads to an unmanageable situation.

Dr Skowkat Ali Zargar, director of Sher-e-Kashmir Institute of Medical Sciences, who isconducting an inquiry, said the government needed to work on alternatives to ease the pressure on the hospital. He said that he had suggested some measures to the hospital administration during a three hour meeting. 'There are some flaws in the hospital on issues like ventilation and insanitary conditions. Besides, the security staff can't be seen discharging their duties properly, which adds to the problem,' he said.

'It is a grave concern for all of us that over 350 infants have died over the past five months at the hospital. It demonstrates negligence on the part of doctors and the government,' Rashid said demanding immediate measures to provide best healthcare facilities to the patients. Earlier an independent MLA, Engineer Rashid protested outside the hospital calling them 'mass murderers'. On Thursday, the medical superintendent of the hospital was relieved of his duties. Read more about the hospital's problems in detail here