Fouad Yahya, a resident of the Gaza Strip, had never expected that one day a fish will help treat his skin disease, a therapy that he learnt about via the internet. ‘I smiled as I inserted both of

Fouad Yahya, a resident of the Gaza Strip, had never expected that one day a fish will help treat his skin disease, a therapy that he learnt about via the internet. ‘I smiled as I inserted both of my feet in a vessel filled with warm freshwater containing dozens of Garra Rufa fish, a toothless kind of fish used for such kind of therapy,’ Xinhua quoted him as saying.  ‘I relaxed as the fish started to nibble at the dead skin of my feet, a process that activated the blood cycle in my feet,’ said Yahia. The man said he had heard about ‘Doctor Fish’ but had never imagined he would be treated with such therapy. Also Read - 4 reasons why you should not go for a fish spa

The Garra Rufa fish, which eats dead skin of the human bodies, is used for treating various kinds of dermatological diseases such as psoriasis and eczema. Alaa Abu Ghali, a Palestinian specialist in alternative medicine from Rafah town, told Xinhua that he had used Apitherapy to treat different diseases until he travelled to Asian countries and brought back ‘Doctor Fish’ to Gaza. ‘I read much about ‘Doctor Fish’ which treats many kinds of skin diseases besides being used for making skin massage. I decided to open the first clinic in Palestine to treat people with ‘Doctor Fish,’‘ said Abu Ghali. Ahmad Ali, a 34-year-old Gaza man who suffers psoriasis, sat in a reception room of a dermatology clinic in Rafah town waiting for his turn. Ali told Xinhua that this was his second visit the clinic. ‘I had lost every possible hope to treat myself… After having the first fish therapy session, I got great results.’ Also Read - Woman loses all her toes of one feet to fish spa in Thailand

After the Hamas seized control of the Gaza Strip in the summer of 2007, Israel imposed a tight blockade on the enclave banning the entrance of various kinds of medical products to Gaza, including different types of materials used for alternative medication. Abu Ghali said he pays a lot for medical materials, which are smuggled into the Gaza Strip through tunnels underneath the Gaza-Egypt’s borders. However, many countries have warned that this kind of therapy may transmit certain infection diseases if the same fish and the same water are used for more than one patient. Abu Ghali said that all his patients would be under strict observations throughout the therapy session.

Sunlight a potential cure for asthma? 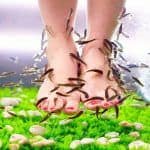 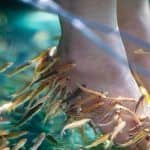