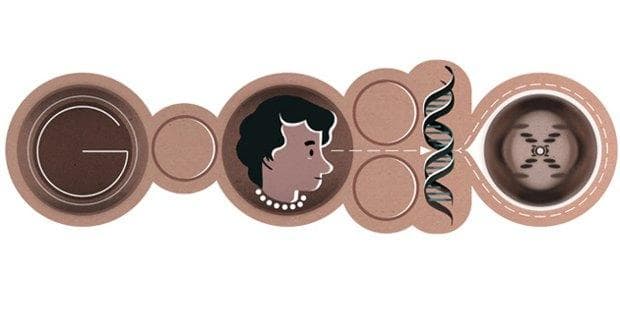 Today the Google Doodle is celebrating the 93rd birthday of one of the most influential female scientists of the 20th Century Rosalind Franklin. Born in an era when female scientists were very rare, (it's believed that she wasn't even allowed to dine with her male colleagues) Franklin would go on to do vital work in understanding the molecular structure of DNA, RNA, viruses, coal and other things. She is most well-known for her work on the DNA molecular structure that laid the foundation for James Watson and Francis Crick to discover the double-helix the polymer structure of DNA which is arguably the greatest scientific discovery of the 20th Century. Her work on the DNA structure was sadly cut short by her untimely death due to ovarian cancer at the age of 38.

In the doodle, she's staring through the double helix at Photo 51 - a nickname given to an X-ray diffraction image of DNA taken by Raymond Gosling under her direction at King's College which would play a vital role in demystifying the DNA structure. 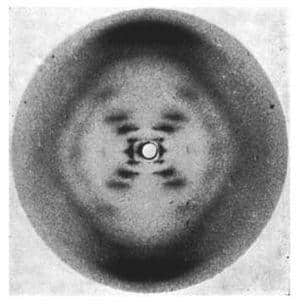 The photo was given to Watson by Maurice Wilkins, another member at King's College and Crick and Watson would go on to use it to change history. The photography provide vital info about the DNA the most important being the double helix strands were anti-parallel. It's one of the most hotly debated topics among biologists whether Watson and Crick could've deduced the structure of the DNA without the photo or whether Franklin could've done it from her own data had she survived (Wilkins had given the photo to Watson and Crick without informing her). Watson has later admitted the iconic nature of her work and admitted that his description of her in his book The Double Helix was often wrong.

After her work on DNA, Franklin worked on the tobacco mosaic virus and the polio virus. She died on April 16 1958 due to ovarian cancer. Rosalind Franklin was an inspiration to scientists all over the world. Sadly, she wasn't even nominated for the Nobel Prize in 1962, when Crick, Watson and Wilkins were awarded the Nobel Prize for their work on nucleic acid (not just DNA structure) but it's enough to say that her legacy thanks to initiatives like the Google Doodle will live on forever.