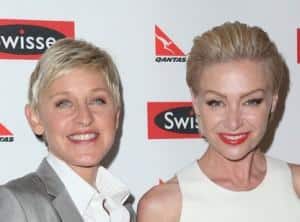 Australian-American actress Portia De Rossi says she never wanted to be a lesbian and once thought being gay was 'strange'. The 40-year-old, just celebrated her fifth wedding anniversary with TV personality Ellen DeGeneres, also admitted that she thought lesbians 'hated men', reports radaronline.com. 'I just didn't want to be a lesbian. I'd never met one for a start and I just thought they were strange, they hated men and they were very serious,' de Rossi said in an interview.

'I had these ridiculous images in my head and there were no out celebrities or politicians or anybody that I could look to and go, 'Oh, I could be like that. There was nobody that I could say, 'I could date her and I want to be like her.' I just kind of thought I don't want to live like this. I don't have to, I don't need to, I just shut down the emotional life,' she added.

But things began to turn around after she met DeGeneres backstage at an awards show in 2004. She came out as gay a year later. 'For me, being honest about who I was, coming out, being gay, starting to date, that was a huge turning point for me, because I realised without changing my life, there was no point in changing the way that I ate,' the 'Arrested Development' star said. De Rossi and DeGeneres got married on Aug 16, 2008.

For more articles on sexual health, visit our Sexual Health section and for videos check out our YouTube Channel. Don't miss out on the latest updates. Follow us on Facebook, Twitter and Google Plus.