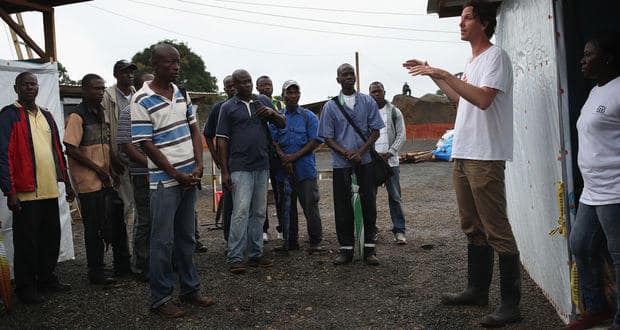 MONROVIA, LIBERIA - AUGUST 17: Doctors Without Borders (MSF), staffer Brett Adamson, from Australia, briefs local MSF staff on procedures at the new Ebola treatment center on August 17, 2014 near Monrovia, Liberia. The facility initially has 120 beds, making it the largest such center for Ebola treatment and isolation in history, and MSF plans to expand it to a 350-bed capacity. Tents, beds and much of the medical supplies at the center were provided by UNICEF. The Ebola epidemic has killed more than 1,000 people in four African countries, and Liberia now has had more deaths than any other country. (Photo by John Moore/Getty Images)[/caption]

The ebola outbreak seems to be compounded by mass hysteria after residents in Monrovia, Liberia raided a quarantine centre for suspected patients and took items including blood-stained sheets and mattresses. The violence occurred on late Saturday and was led by angry residents who were aghast at the decision to bring patients to the holding centre from other parts of Monrovia, assistant health minister Tolbert Nyenswah said. There were about 30 patients at the centre who fled at the time of the raid and are currently AWOL. A police official who insisted on remaining anonymous said that the residents took medical equipment and mattresses and sheets and the whole of West Point a nearby slum are at a risk of infection.

This incident only creates a new challenge for the Liberian healthcare system which is already struggling to contain the outbreak. West Point is home to at least 50,000 people and there's a deep mistrust of the government among its residents. Assistant health minister Nyenswah added that despite rumours that state the area has been quarantined, no such steps have been taken.

The disease has already claimed 1,145 lives in West Africa including 413 in Liberia according to the WHO.

Three nationals from Nigeria had been admitted to RML Hospital for screening. In addition, a 32-year-old Indian from Chattisgarh who returned from Nigeria was admitted in a hospital in Bhilai. WHO has said air travel, even from Ebola-affected countries, is low-risk for transmission of the disease. The WHO has reported a total of 2,127 cases and 1,145 deaths due to Ebola from affected countries.

'It's not prevalent in India, but people living in remote areas, where living conditions are poor, are always at risk of getting infected. But largely there is no need to worry as such.' Read more about Ebola virus causes, symptoms, diagnosis, treatment, prognosis and prevention