New Delhi, Dec 7: A 25-year-old woman was allegedly raped by a cab driver Friday night after she took the cab around 9.30 p.m. from Vasant Vihar area in the capital - the city where six rapes and 14 molestation cases were reported every day the first four months of 2014. (Read: Delhi Shame: What could have averted the Uber rape case)

This incident has 'appalled' the entire film industry. Angered by the incident, here's what some of the BTown stars have tweeted:

Akshay Kumar: You hire a cab thinking it's safer and pay more but sadly even that isn't an option anymore. Not sure how many more such incidents before we have stricter laws! #DelhiShamedAgain 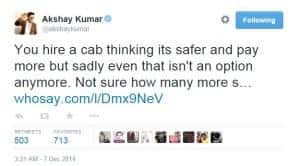 Karan Johar: Appalled at the @Uber incident!! If they didn't do an adequate background check of the driver they have no reason to operate anywhere!!!! 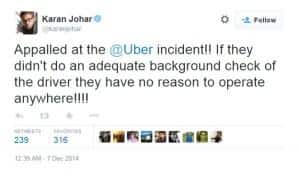 Rohit Roy: Just the other day, a friend was recommending Uber very highly... Now this!! Appalling. It's like the guard at ur home robbing U!! (Read: Police arrests Uber rape case accused in Mathura)

Vishal Dadlani: Taking a cab alone at night? Take a picture of the driver, with the numberplate, & send it to a friend. Should act as a basic deterrent.

According to a recent compilation of data by Delhi Police, 616 rapes and 1,336 molestation cases were registered between January 1 and April 30 - a 36 percent increase in rape cases compared to around 450 cases registered in the same period last year. Data of the first four months of 2014 show that six rapes and 14 molestation cases have been reported every day. Police, however, claim to have solved almost 90 percent of the cases. Cases of molestation recorded in the same corresponding period show a similar rise with over 1,000 registered cases.