In a step towards ensuring public safety, 60 mobile radiation detective systems will be installed on Delhi Police vehicles and about 40 personnel will be trained to tackle chemical, biological, radiol

In a step towards ensuring public safety, 60 mobile radiation detective systems will be installed on Delhi Police vehicles and about 40 personnel will be trained to tackle chemical, biological, radiological and nuclear (CBRN) attacks, an official said Wednesday. Also Read - Over 200 policemen in Delhi donate blood for dengue patients

‘Sixty mobile radiation detective systems will be installed to help police detect radioactivity in the city. This system will also act as a deterrent for unauthorized usage of radioactive materials,’ National Disaster Management Authority’s vice chairman M. Shashidhar Reddy said. Referring to the unsafe disposal of nuclear material in the city’s Mayapuri area in 2010 when some people were hospitalised for radiation injuries caused by Cobalt-60, Reddy said: ‘Many police personnel lacked training on handling radioactive materials, and it is necessary that they be made aware about handling such CBRN attacks.’ Reddy added that about 40 police personnel will be trained at a two-day workshop to handle CBRN attacks. Also Read - Delhi police turn to yoga to beat stress

‘In the workshop, we will train the police personnel how to attend to CBRN injuries, including specialised investigations like radio biodosimetry, use of decorporation drugs for radiation and antidotes for hazards,’ J.K. Bansal, a member of NDMA, said. He also highlighted the importance of using face mask, gloves and boots while handling a CBRN attack.

Security personnel guarding Parliament House complex have already been trained on how to tackle CBRN attacks.

Want to lose weight? Have an early lunch

Drugs from the bottom of the sea could save your lives! 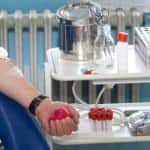 Over 200 policemen in Delhi donate blood for dengue patients