Home / Health News / Could Amitabh Bachchan actually be a ‘bad eater’? That’s what he claimed at Shilpa Shetty’s book launch

Could Amitabh Bachchan actually be a ‘bad eater’? That’s what he claimed at Shilpa Shetty’s book launch

Shilpa Shetty just launched her first book called ‘The Great Indian Diet’ which she has co-authored with Luke Coutinho. Shilpa Shetty is one of the fittest actresses of Bollywood and is known for getting in shape post her pregnancy. The book was launched in the presence of Bollywood stars like Amitabh Bachchan, Anil Kapoor, Hrithik Roshan and Varun Dhawan. Also Read - Amitabh Bachchan, son Abhishek test positive for COVID-19 even as cases surge past 8 lakh in India

During the book launch, Shilpa Shetty highlighted that everyone is obsessed with losing weight, but no one thinks about focussing on health. She also wants to bust certain myths and taboos associated with Indian food. The book launch was even more exciting because superstar Amitabh Bachchan made some revelations about his diet. The megastar ‘s secret to be fit as a fiddle at 73 is supposed to be his diet. Also Read - 5 Bollywood divas who swear by yoga to stay youthful and healthy

However, on Wednesday evening during the book launch, he said he does not follow any particular routine as far as food habits are concerned and called himself a ‘bad eater’. I’m a bad eater and I’m sure that when you call home the answer will be the same. I don’t follow any routine. My eating habits are very dissimilar to what any of you are following. I just eat whatever comes to me, I don’t know that it is, said Amitabh Bachchan. He also said that he was the wrong person to launch Shilpa Shetty’s book on diet because of his wayward eating habits.

I never used to do any kind of exercises. Most of the times when I was working in my earlier films, I never really thought about it though or I wasn’t advised about it or I perhaps didn’t have the time. But having seen some of my visuals in some of my films about 5-6 years ago, I realised that I needed to be in shape and started going to the gym on some kind of a regular basis, he added.

He had previously revealed that he follows a healthy diet where he avoids drinking tea or coffee and has given up drinking alcohol too. Considering how fit he is at his age, Mr Bachcahn definitely isn’t a ‘bad eater’. Read more about his diet here. 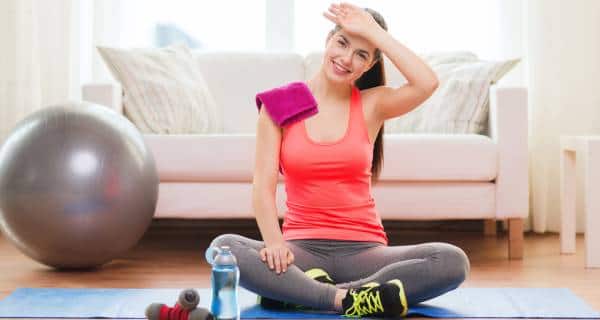 5 ways to stay motivated while exercising indoors this winter