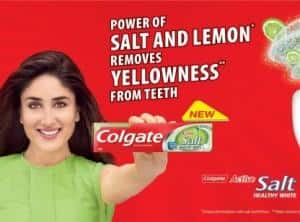 The product focusses on using a combination of salt and lemon to remove yellowness in teeth.

Sharing her experience of associating with the brand, Kareena says that 'as actors, it's important that we stay healthy and present the best of ourselves. And that's exactly how Colgate Active Salt Healthy White toothpaste adds value for me'.

'It simply helps me to say no to yellow teeth in a refreshing manner with an age old remedy of salt and lemon. So go ahead try it and see how healthy white teeth are now a reality for you,' she added.

Shriya Saran also feels that 'yellowness of teeth is a common problem faced by many of us.' 'The new toothpaste from Colgate promises to solve that for you,' she adds. (Also read: Madhuri Dixit launches Oral-B's revolutionary new toothpaste)

Colgate VS Pepsodent - the toothpaste wars

Recently, Colgate was involved in a highly controversial toothpaste war with Pepsodent. An advertisment was put out by Pepsodent which claimed that its toothpaste Pepsodent Germi-check could kill 130% germs as compared to Colgate four hours after brushing. In response, Colgate objected saying that the advertisement was claiming that its germ killing capacities was zero, and accused Pepsodent of slandering and denigration. The court rejected the claim saying, 'It is arguable that the appearance of the two indices at the bottom of the left and right screens as well as the 'Super' which shows that Colgate Strong Teeth is indexed 100 per cent and Pepsodent Germi Check 130 per cent will enable a discerning viewer to appreciate the comparison in its proper perspective. In any event, the claim of 130 per cent germicheck power appears more consistent with the defendant (HUL) puffing up Pepsodent GSP to show that it is better than Colgate Strong Teeth. It is difficult to view this as denigrating, slandering or rubbishing Colgate Strong Teeth.'