Chronic kidney disease (CKD) and its complications can kill at any age, warns a new study from Johns Hopkins Bloomberg School of Public Health. The study shows that the prevalence of CKD shoots up wit

Chronic kidney disease (CKD) and its complications can kill at any age, warns a new study from Johns Hopkins Bloomberg School of Public Health. The study shows that the prevalence of CKD shoots up with age from four percent between 20 and 39 years to 54 percent among adults who have crossed 75 years. Also Read - Vitamin B12 deficiency: Know the symptoms and how to address them

Some of the CKD symptoms are anaemia or shortage of red blood cells (RBCs). Healthy kidneys produce a hormone called erythropoietin (EPO) that tells your bone marrow to make red blood cells. As kidneys fail, they make less of the hormone. With fewer RBCs, you get tired much faster, even when you are doing routine tasks like climbing a flight of stairs or walking to the mailbox. Feeling very, very tired can be a symptom of anaemia. Also Read - Being human: Colleague donates a kidney to save the life of a junior

Its other symptoms are muscle weakness, shortness of breath, erectile dysfunction, pale skin and pale gums, fingernail beds, feeling dizzy, feeling cold all the time and a desire to eat ice, dirt, laundry starch, or clay.

Kidney disease is measured by estimating kidney function (glomerular filtration rate, GFR), and kidney damage is often quantified by measuring albumin, the major protein in the urine standardised for urine concentration, according to a Bloomberg statement.

Both low kidney function and high albuminuria were independently linked with mortality and end-stage renal disease regardless of age.

‘By collaborating with many of the world’s leading studies, we were able to see a clear pattern showing that both of the current indicators of chronic kidney disease are strongly associated with risk, even at older age,’ said Josef Coresh, the CKD Prognosis Consortium’s principal investigator and professor of epidemiology at Bloomberg.

Stein Hallan, a nephrologist from Norway, who led the writing of the manuscript on behalf of the 178 collaborating investigators, said: ‘Instead we need to focus on the range of risks at each age and potential strategies to help patients minimize unnecessary exposure to medications toxic to the kidney and pursue other strategies to best treat kidney disease across full age spectrum.’

The findings were presented at the American Society of Nephrology conference in San Diego, California.

Brain can shut off old habits when required! 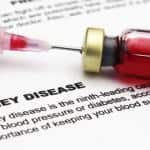