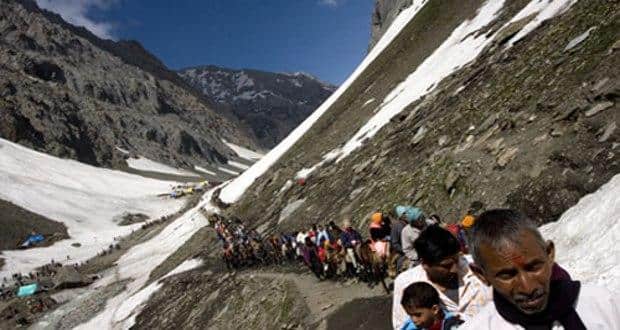 Over ten people have died in the past three days during their pilgrimage to amaranth.The Supreme Court has expressed shock over the large number of deaths and directed the central government to provide medical aid to Jammu and Kashmir Government. "It is a very sad thing. Within three days, the toll has gone up from 87 to 97. We are worried that more people should not die," the court observed. The apex court bench of Justice V.S. Chauhan and Justice Swatanter Kumar said that the medical facilities at Baltal should be augmented and made three times of what was available at present. Expressing concern over high mortality rates, the court said: "At least in this session no more deaths should take place."

The court directed the Jammu and Kashmir government to take help from other states, including Chandigarh, to increase medical facilities for pilgrims. The court said that the high-power committee will visit the shrine when the yatra is on. The Supreme Court has set up a high-powered committee, headed by the Jammu and Kashmir governor, to study reasons for the growing number of deaths of pilgrims during the annual Amarnath Yatra. Taking suo motu cognisance of reports of the deaths of pilgrims who make the trek to the high-altitude cave shrine dedicated to Lord Shiva, Justice B.S. Chauhan and Justice Swatanter Kumar had said that the panel would visit the place to have a first hand account of the situation.

The court asked Solicitor General Rohinton Nariman to assist it in the matter. "Every day we hear someone dies. The high rate of mortality is undisputed," the court had said. According to the latest count, 86 people have died since the pilgrimage started June 25. Reiterating that it was a delicate matter, the court said that lakhs undertake the pilgrimage every year and there was a tremendous increase in deaths. The court noticed that the approach path leading to the shrine, located at 12,756 feet altitude, was very narrow with pilgrims moving either on foot, horse-backs or in palanquins. "Due to the lack of space, pilgrims skid and fall thousands of feet below and die," Justice Kumar had said. "It is a glacier. There is ice below and sky above," he added. The court blamed the lack of facilities for the growing number of deaths of devotees. Pointing to the lack of public amenities, the court said that there were two poles that held up a polythene sheet to serve as the public convenience for women. Justice Kumar also noted that people sometimes waited an entire day to pay obeisance at the shrine. The panel, which has been told to suggest ways to ease problems faced by Amarnath pilgrims, was told to submit a preliminary report before Aug 13. The court said that the high-powered committee would make suggestions to the apex court, which in turn would issue directions to the government. In another direction, the court said that the iron guilds at the shrine should be replaced either by glass or any other transparent material.