Can your tattoo give you cancer? 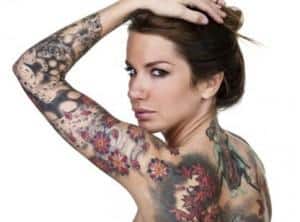 Thinking of getting that tattoo that makes you stand apart from the crowd? Think again. Scientists in Britain have found evidence that the nanoparticles present in tattoo inks can reach the major organs of our body and cause cancer!

The study led by Jorgen Serup, professor of dermatology at Copenhagen's university hospital, that as many as 13 out of 21 commonly used European inks have cancer causing chemicals in them.

'Millions of Europeans are now being tattooed with chemical substances of unknown origin. Until now, no one has really looked at the risks, and we need to get proper research going in this field. People should be given written information about the inks that are used on them. It may be that, like cigarette smoking, they still choose to take the risk, but they need to be informed,' he said at the first international conference on tattoo and ink pigment damage.

Manufacturers of tattoo ink have said that they agree that 5 per cent of tattoo studios use inks containing carcinogenic compounds, but efforts are on to reduce the percentage to zero. They also want EU to force all manufacturers to conduct quality tests and make the results public.

What Indian experts have to say:

Previously too, doctors have found a link between tattoo ink and cancer. Blue ink, the age-old colour of choice for tattoo artists, has cobalt and aluminum. Red ink may have mercurial sulfide and certain coloured inks often contain lead, cadmium, chromium, nickel, titanium and other heavy metals.

'The equipment used in tattooing and body piercing, if contaminated with infected blood, can risk transmission of blood-borne viruses such as HIV, Hepatitis B and C and various skin cancers like squamous cell, carcinoma and melanoma. Everyone who gets a tattoo doesn't get skin cancer. But they have increased risk as most tattooists use ink which is arsenic. Many youngsters don't realise the damage tattoos cause to their skin. They want them for a lifetime. Certain designs are deep penetrated into the skin and damage muscles,' Dr D J S Tula, consultant plastic surgeon at Delhi's B L K Hospital told IANS.

Experts have also stressed the importance of not having a tattoo near a mole. 'To know the changes occurring in a mole symmetry, border, colour, size, shape and texture. If there is a tattoo around it or on it, the key warning signs on the mole cannot be noticed and it might later evolve into melanoma or another skin cancer.', Dr Amit Kumar, an oncologist told IANS.

'One should go to a professional tattooist. A professional will use only organic inks. The best inks are imported from the US, Britain and Australia. Some Chinese inks available at cheap rates in the market might be harmful. Aftercare procedures should also be followed to avoid infected on the inked skin. My clients have not had any cancer or skin disease. There might be a slight inflammation for a few days after the tattoo is made,' said Anu Singh, who owns Tattoo Empire of India. (Read: Tattoos may increase skin cancer risk)

It can also lead to hepatitis:

'Needles are not the only things that can cause transmission of the hepatitis virus or even HIV. The silent culprits are the expensive ink bottles in which the artist dips his needle time and again while doing the tattoo. So even if they use disposable syringes or fresh gloves, if an artist uses the same ink bottle for several clients, the chances of transmission of the virus increase. Now since these ink bottles are mostly imported, they generally don't use fresh bottles for every client,', Dr Ajay K. Sachdev, head of surgical gastroenterology at the Artemis Health Institute, told IANS.

'Tattoo making involves pricking the needle deep into the dermis the layer under the skin surface which results in bleeding and the same needle is dipped into the paint bottles which leads to transferring of infection. The chances of a person getting infected are higher if one gets it done immediately after an infected person at a tattoo parlour,' he added. (Read: Tattoos are you aware of their health risks?)