Breakthrough in chikungunya treatment may come from IIT-Roorkee

IIT-Roorkee has claimed to have discovered the anti-viral potential of a drug piperazine -- used for worm infections.

Piperazine is commonly used in deworming treatments against roundworm and pinworm. “Developing a new antiviral drug molecule can take over a decade and that is the reason why we are looking at repositioning existing approved drugs and testing these to see if they can inhibit or kill pathogenic viruses,” said Shailly Tomar from the Department of Biotechnology at IIT-Roorkee. Research has shown that piperazine, which is available in the market, is successful in curbing the spread and replication of the chikungunya virus in a lab setting. “We are currently testing the molecule on animals and hope to take this to clinical trials soon,” said Tomar. Chikungunya is a viral disease transmitted to humans by infected mosquitoes. It causes fever and severe joint pain. Other symptoms include muscle pain, headache, nausea, fatigue and rash. Read here Neem — a natural mosquito repellent you must try! Also Read - Delhi records 45 malaria and 35 dengue cases: Tips for prevention of vector-borne diseases

The researchers said they found that piperazine would bind itself well with the hydrophobic pocket on the alphavirus capsid protein. “This pocket is key to the replication of the virus and its spread inside a host. This inhibition of this pocket prevents budding and spread of the virus and can help in treating the virus effectively using existing drugs,” said they said. Delhi saw the worst outbreak of chikungunya in 2016, with a total of 7,760 cases being reported from across the national capital. In 2017, Delhi has so far seen nearly 500 cases of Chikungunya. Read more about 7 common signs and symptoms of chikungunya 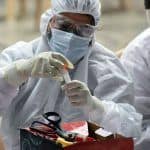