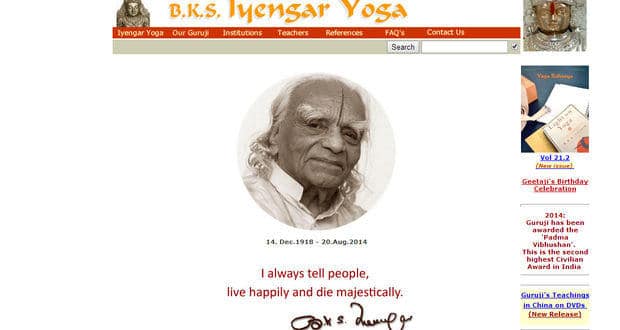 Bellur Krishnamachar Sundararaja Iyengar, better known as BKS Iyengar recently passed away at the ripe old age of 95 and even he couldn't have dreamt of the impact his yoga teachings have had all over the world. His teachings transformed yoga from an esoteric spiritual practice, practised in the East, to a worldwide phenomenon and one of the most popular forms of exercise in the West. His journey began when his brother-in-law Sri Tirumalai Krishnamacharya, invited him to come to live in Mysore to practise yoga to improve his failing health after he had been afflicted with malaria, typhoid, flu and TB as a kid.

He would then go on to set up his own practice, befriend violinist Yehudi Menuhin, who became his student and invited Iyengar to Europe to teach others. His students would go on to include luminaries from around the world including Aldous Huxley, J Krishnamurthy and sportsmen like Martin Crowe, Sachin Tendulkar, Anil Kumble, Javgal Srinath, Rahul Dravid and Virendra Sehwag. His classes are even taught to military academies and police forces around the world and even in prisons in Israel!

Such is his legacy that his birthday is celebrated as BKS Iyengar day in San Fransisco and his book Light on Yoga has been translated into 17 languages and he has 72 schools teaching his style of yoga across the US, Europe, India, Africa and even in China! Despite his celebrity status, Iyengar lived a frugal life. When asked about yoga's popularity in the West, he told the NY Times: 'I think many of my students have followed the advice I gave years ago, to give more than you take. The commercialism may wash off sometime later.'