Launched by Modi in September, the scheme seeks to bring 50 crore poor people under a medical insurance cover of Rs 5 lakh per year. The states are required to pump in 40 per cent of the funds.

Accusing the Centre of neglecting Bengal’s contribution to the Ayushman Bharat scheme, West Bengal Chief Minister Mamata Banerjee on Thursday announced that her state will not pay its share of funds for Prime Minister Narendra Modi’s ambitious healthcare project and asked the Centre to pay the full amount if it wanted to run it. Also Read - President Ram Nath Kovind says quality health for all a shared goal

Launched by Modi in September, the scheme seeks to bring 50 crore poor people under a medical insurance cover of Rs 5 lakh per year. The states are required to pump in 40 per cent of the funds. Also Read - Bengal block achieves almost 99% institutional child delivery

With the exception of Delhi, Odisha, Kerala, Punjab and Telangana, all other states and union territories have inked the pact with the Union Health Ministry for running the scheme. Also Read - How does a natural disaster like earthquake hit you psychologically?

“Bengal will not provide 40 per cent of the funds for the scheme. If the Centre is keen to run the scheme, it should cough up the full amount,” Banerjee told a rally in Nadia district.

Banerjee alleged that the Prime Minister was taking full credit for the scheme.

“Why should we contribute 40 per cent of the funds for Ayushman Bharat? The letterhead has the picture of the Prime Minister’s face with a lotus (BJP election symbol) instead of the symbol of the Indian government?” Banerjee said.

Attacking Modi, she said he was sending letters to people through post offices claiming that the central government was behind the scheme.

Banerjee charged the Centre with running a parallel administration in the state. “They claim they do everything and all projects are run by them – be it healthcare, housing, education, infrastructure.

“If the Centre is doing everything for everybody, what is the need for state governments?”

Banerjee said that in reality, the healthcare scheme Arogyashree implemented by her government was miles ahead of the Centre’s Ayushman Bharat. 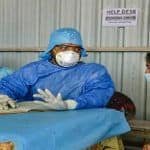 COVID-19 is an opportunity to speed up Ayushman Bharat Scheme, says WHO chief